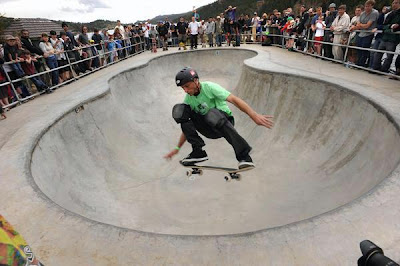 As Hawk passed one of the windows, he noticed a group of kids peeking in, their hair drenched, hoping to catch a glimpse of their hero. He turned, smiled and waved. Squeals of excitement were heard through the glass.

Hawk traveled to Colorado to fulfill a promise he made on prime-time TV. He vowed to name a skatepark after Nathan Lazarus, an 11-year-old student at Alexander Dawson School in Lafayette.

The two met while Hawk was a contestant on the Fox game show "Are You Smarter Than a 5th Grader?" to win money for the Tony Hawk Foundation. Nathan partnered with him on a few questions and brought in $175,000.

Nederland's skatepark had already been approved for a $25,000 grant from Hawk's foundation, which helps build skateparks in low-income communities. The foundation offered an additional $50,000 if the town named it after Nathan.

"Nathan Lazarus helped me win more money for the foundation than I could have on my own," Hawk said.

On Saturday, Hawk made the trip to dedicate the new park, and a diverse group of skateboarders braved the wet weather to meet him. The line for autographs extended outside the Teens Inc. entrance to the nearby skatepark.

"It's crazy to have people come here and think of it as the Nathan Lazarus Skatepark," Nathan said. "I don't know what to say yet. It's just awesome."

"I think skating is a really active, healthy sport," Hawk said. "We all do something different, but we all come together to show each other what we're doing."

Randy Lee, executive director of the group Nedsk8, which secured the funding for the park, said the process was difficult at times because of the poor reputation skating has earned over the years.

"A skatepark can be a hard sell because it is mistakenly associated with juvenile delinquents. In reality, it's the opposite," Lee said.

The sound of wheels grinding on concrete was constant at the Lazarus skatepark, except when the rain forced everyone out of the bowls, dips and turns. Still, they stood to the side with their boards tucked under their arms and waited.

Hawk was also scheduled to do some tricks for the crowd — assuming the weather cooperated.

Finally the rain let up, and a group of six volunteers went down with brooms to sweep the water into the drain. As the park was officially dedicated in Nathan's name, the sun appeared from behind the clouds.

Hawk began to zip up and down the ramps, spinning in the air and landing trick after trick for the cheering crowd.

"It's indescribable," said Kohlton Anderson, 12, who had his skateboard signed by Hawk. "It's the best thing in the world."