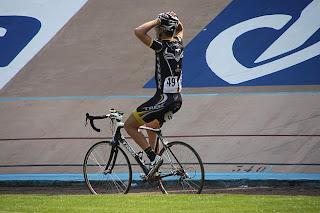 Taylor Phinney (Trek-Livestrong) won the Under 23 Paris-Roubaix race on Sunday, beating a group of 10 riders on the Roubaix velodrome. He joined Stephen Roche and Thor Hushovd in the history books of previous winners and became the first American winner in the process.

"I just found some pictures this morning as I haven't seen any since the win. I haven't won a road race in a few years so it's a really nice feeling to be able to put your hands up at the end of such a hard race. I was almost in tears at the finish," he told Cyclingnews.

Phinney had been targeting Paris-Roubaix as one of his main objectives this year along with the World Track Championships. Coming into the cobbled Classic, he knew that the course would suit his strengths. However, having raced it as a junior and having had his "butt kicked" he knew that he'd face stern competition.

"It was exciting to win, but I knew that I would be up there near the end. All my track cycling paid off."

It had been a life-long ambition to win Paris Roubaix for Phinney – a race he grew up idolising from his home in Boulder, Colorado. "I really liked to watch the race when I was growing up and it really appeals to me. I like to put on a show and entertain and that's just what Paris Roubaix is all about."

The Trek-Livestrong team had four riders amongst the leaders in the final sections of cobbles. "The whole pack would go hard on the cobbles and then slow up on the road sections because of the headwind and with around 60K to go I was cramping a bit."

Phinney recovered and made the final split before the Roubaix velodrome.

"Most of the guys knew me, but they didn't know what to expect from me. I win time trials and pursuits, but not much on the road. When we got to the track, I was in a perfect position but I was blocked in with a lap to go and just had to give it everything had."

Phinney will take a few days off the bike as he recovers, before evaluating his aims for the rest of the season. "Roubaix was the biggest goal for the whole year so it about looking forward and look for a new goal to inspire me for the rest of the year."
Posted by Recovox at 10:30 AM