Whitfield ‘wants a crack’ at another medal 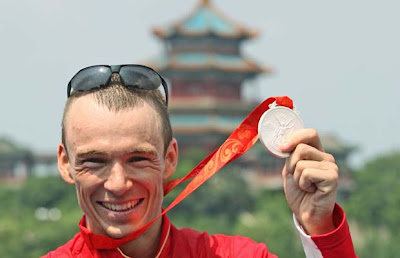 There are more lines around the eyes now and teammates are always making good-natured jabs at his age, but Simon Whitfield still sounds like an excited kid when he talks about his passion for triathlon.

“I love it,” he says. “I love the challenge. I love being immersed in it every day.”

The two-time Olympic medallist from Victoria laughs about “out-touching” an up-and-coming 14-year-old at the wall of the pool in training the other day, a kid who wasn’t even born when the now 34-year-old Whitfield competed in his first World Cup.

And those eyes sparkle and he grins broadly when asked about the daunting commitment to a fourth Olympics in London in 2012.

“It’s only 3-1⁄2 [years],” Whitfield said Monday at a news conference in Vancouver to confirm the national team’s coaching and support staff. “I think, ‘Gosh, it will be around the corner.’ For these young guys it feels like it’s a long way away … but it just moves quickly.”

Experience, marriage and the birth of his daughter have supposedly matured Whitfield. But he freely admits to being the most immature guy on the team. And nobody does boyish exuberance quite like the tousle-haired Kingston, Ont., native.

He rode in Victoria a couple of weeks back with members of the Canadian freestyle ski team — “they were hilarious, I was thrilled” — but seemed genuinely peeved that he couldn’t join them for another part of their conditioning camp. “I wanted to play hockey with them. I said ‘you guys get to play hockey every day.’ I wanted to play!”

Whitfield, who won gold when triathlon made its Olympic debut in 2000 in Sydney and silver at Beijing last year, says he doesn’t want to just make the team for London. “I want to go take a crack at a medal again.”

After the previous head coach, Joel Filliol, who was also Whitfield’s personal coach, left to join the British team, Whitfield mused about challenging himself over the next few years by racing longer distance triathlons, including half Ironmans. But after finishing just 14th in the first of the International Triathlon Union’s new World Championship Series events last month, he quickly changed his mind.

“I distracted myself for a little while with that. It was a fun thought, but I tell you what, this new World Series is very exciting. And I just like going fast. I still like to run around [Beacon Hill Park in Victoria] very fast. When you do Ironmans, you have to run around the park more times slowly and I like going less times quicker.”

The ITU’s seven-race World Championship Series, which has relegated the World Cup to second-tier status, offers increased prize money and live television at every stop. It ends with a Grand Final on Australia’s Gold Coast that’s worth double points. That’s the event Whitfield is pointing towards this season.

“What I want to do is win the race that everyone else wants to win. That’s always my goal.”

Whitfield is joined on the Team Teck national squad by Paul Tichelaar of Edmonton, Kyle Jones of Oakville, Ont., Brent McMahon of Victoria, Kathy Tremblay of Montreal, Lauren Groves of Vancouver and Kirsten Sweetland of Victoria.

Sweetland, the 20-year-old former world junior champion who has been slowed recently by a stress fracture in her back, trained in Australia from October to May, then won the opening World Cup of the season.

“They have a different style of training that really seems to suit me as an athlete. And the lifestyle down there is very relaxed. I knew a coach in Australia who is very good at keeping me in a harness, basically. I tend to push myself very hard.”
Posted by Recovox at 10:37 PM