Basso: Armstrong Will Be A Beast At The Tour 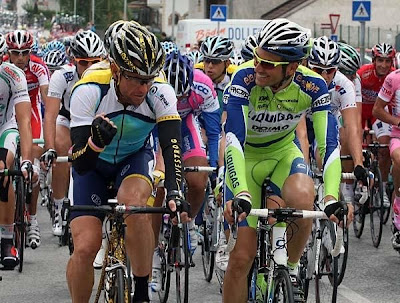 Lance Armstrong is on track to win his eighth Tour de France this July, according to Italy's Ivan Basso. Armstrong completed his first three-week race, the Giro d'Italia, in over three years last month and finished twelfth overall.

"He place 12th at the Giro without being in true form and with a broken collarbone the month be. Had he arrived in form he could have raced for the win but now he has the Giro d'Italia in his legs and I think he can win the Tour," Basso said.

"He will go like a beast." - Basso on Armstrong

Armstrong returned to cycling after a three-year retirement last winner, but a crash in Castilla y León stage one, March 23, affected his Giro preparations. He finished the Giro in Rome on May 31, 16 minutes back on winner Denis Menchov (Rabobank) and 12 minutes back on Basso (Liquigas) in fifth.

The Tour de France starts July 4 in Monaco and it will be Armstrong's first time in the race since he won his seventh straight title in 2005.

"He will ride the Tour like no one else because he has the experience of seven Tour de France wins. He will go like a beast."

The team has three classification riders with Armstrong, 2007 winner Alberto Contador and Levi Leipheimer. Armstrong and Contador have only raced together once this year, the 160 kilometres prior to Armstrong's crash in Castilla y León. The lack of experience together and strong individual desires to win may ruin the team's chances.

"He won't have problems with Contador and Leipheimer because the team is guided by the best, Johan Bruyneel. Look at all the Giro, Tour and Vueltas he has won over the years."

Team Manager Bruyneel has directed his team to eight wins in the Tour, two in the Giro d'Italia and two in the Vuelta a España. Basso raced for Bruyneel briefly in 2007. He left the team after investigations linked him to Operación Puerto.

Basso recently pulled out of the Dauphiné Libéré because of a virus. He is better now and taking a break ahead of the second half of the 2009 season. He will target the Vuelta a España, August 29 to September 20.
Posted by Recovox at 6:04 PM

Tom Hodge, why are taking articles from Cyclingnews and running them without any reference to the site or the authors? There are several articles here, and also here on the stanford.wellsphere website that have been taken from Cyclingnews and all references to that site have been removed. I would ask you to either credit the site and writer in each case, or else remove the articles immediately as it is infringement of copyright. Other writers and sources have been credited, so I don't see why the same hasn't been done in these cases.