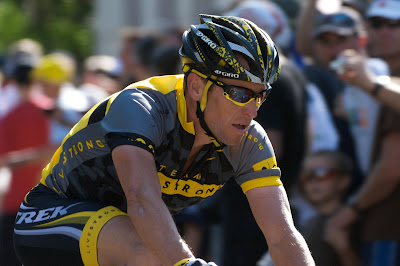 There is a new route and a new drug-testing program, but the return of an old name is getting the most attention as the start of the Tour de France draws near.

Four years after retiring from professional cycling, Lance Armstrong will return with the Kazakhstan-based Astana team to try to pad his record of seven Tour victories when the 2009 race starts Saturday.

Despite returning to cycling less than a year ago and suffering a broken collarbone in March, Armstrong is considered one of the favorites to win the race. His Astana teammate, 2007 Tour winner Alberto Contandor, has the shortest odds from bookmakers, just ahead of Armstrong.

In a conference call with reporters Monday afternoon, Versus commentator Phil Liggett said they have a good chance to finish one-two. Liggett will lead a team of analysts on Versus, a sports cable channel, which will broadcast an average of 13 hours of the race daily over its 24-day run through July.

"My personal gut feeling is that they'll finish first and second," Liggett said, without naming his pick for the top spot.

Age will make Armstrong's quest for an eighth Tour crown more difficult. At 37, the Texan would be the oldest-ever winner, and teammate and rival Contador has overtaken Armstrong in mountain climbs, his strength in the early part of the decade.

Armstrong and Contador are hardly the only competitors with the pedigree to win.

Luxembourger rider Andy Schleck and Australian Cadel Evans, the Tour runner-up the past two years, are strong contenders as well.

The process of handicapping this year's Tour is made more difficult by a new race route. The event starts farther south than usual, in Monaco, and never gets farther north than the traditional endpoint in Paris, where temperatures are already above 80 degrees. Cyclists say the heat will make the first week tougher and will add a new element of difficulty to the mountain stages, particularly the Pyrenees.

"It could make it a much tougher Tour,'' said George Hincapie, a former Armstrong teammate and now with Team Columbia-High Road. "On paper, the Pyrenees days aren't as hard as the Alps days, but if it's hot it'll probably affect the Peloton (the main body of riders in the race.)''

Levi Leipheimer, an Astana member and the third-place finisher in 2007, said the hot temperatures at the recent Giro d'Italia race provided a preview of what to look for in the Tour de France.

"We had a couple hot days in the Giro, and I think it definitely played a role in separating the riders more than normal," Leipheimer said.

However hot it will be, riders sounded pleased to be answering questions mostly about strategy and the route, and less about doping. Performance-enhancing drug use has overshadowed a number of recent Tours, but Leipheimer said that the inception of a new "biological passport" program is removing the cloud of suspicion from all riders.

"I think it's a good thing," Leipheimer said. "They are tightening the net around dopers, and any way they can control the problem is a good thing."

The electronic program supplements better testing methods with a unified record of individual riders' tests to provide a better baseline for interpreting results. Based on information gathered from riders' passports, The International Cycling Union disciplined five riders two weeks ago over "apparent violations.''
Posted by Recovox at 2:41 PM