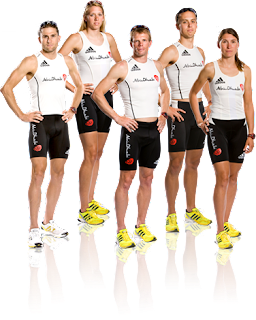 Abu Dhabi Tourism Authority (ADTA), which manages the tourism industry within the emirate of Abu Dhabi, has unveiled its fourth Team Abu Dhabi initiative – this time for the athletic multi-sport of Triathlon, an endurance event which sees competitors swimming, cycling and running against each other in immediate succession in a challenging test of physical strength, endurance and determination.

“Team Abu Dhabi Triathlon will work for us in three ways,” commented Ahmed Hussein, Deputy Director General, ADTA “Firstly, it will be an important promotional tool in Germany, which is one of our key European markets as well as among the worldwide triathlete community which is looking for healthy, outdoor adventure – a wish list the destination can ably fulfil. Secondly, we hope the move will establish a firm foundation for Abu Dhabi to host an international triathlon event in the not too distant future. And thirdly, we look to the initiative to inspire a new generation of triathletes within Abu Dhabi, particularly among young Emiratis whose cultural Bedouin heritage of strength, fortitude and resilience could serve them well in this most challenging of sports.”

Al Sultan is looking forward to the year ahead and promoting his adopted Abu Dhabi home: “I have lived in Al Ain for many years. Even though I also represent Germany, Abu Dhabi is also my home. All the team and I feel that it is a great honour to represent Abu Dhabi and promote the emirate worldwide. Hopefully we can be as successful as our fellow Team Abu Dhabi motorsport champions.”

Team Abu Dhabi Triathlon Manager, Werner Leitner says the initiative is a major boost for the sport and could lead to a substantial expansion of the team.

“This gives us a great opportunity to expand the team in 2010. We will look to recruit other triathletes from either the UK or Australia, given the importance of both countries to Abu Dhabi’s tourism strategy and their thriving Triathlon communities. Our goal is to become the leading team in Triathlon.

"We will back here in December for the Abu Dhabi Adventure Challenge endurance race and will use the emirate’s fantastic facilities as a winter training venue."
Posted by Recovox at 9:17 PM