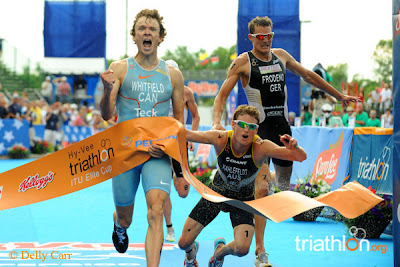 Canadian Simon Whitfield’s renown sprint finish did not let him down today at the Hy-Vee ITU Triathlon Elite Cup. In what seemed like a replay from the Beijing Olympic Games, four men came into the finish straight together side by side: Whitfield, Germany’s Jan Frodeno, who was the man to pip Whitfield in Beijing, Australia’s Brad Kahlefeldt and New Zealand’s Kris Gemmell. Unlike Beijing however, Whitfield would cross the line first with an elated roar one second ahead of his chasers in a time of 1 hour 49 minutes and 43 seconds, claiming triathlon’s top payday. After a photo finish review, the third of the season, it was determined Australia’s Brad Kahlefeldt just nipped the tall German at the line for second with Frodeno in third. Gemmell finished fourth.

“That was some payback for last year, in a sporting sense,” said Whitfield at the finish. “I wanted to get one over on Jan [Frodeno] after last year's Olympic Games. I always want to win the races the other guys want to win. First thing I'm doing is buying this amazing toy house for my daughter Pippa. She's been running round the front yard at home and really inspired me."

Sixty-two athletes hit the warm, calm waters together and almost that entire group would exit together. With such a large group forming on the bike it looked to be a runner’s race, but with $200,000 on the line the strong cyclists were not content to hand it over without a fight. Once a pace had been set it was attack after attack over the 40 kilometre bike loop keeping the average speed high at over 42km/hr. Led by the 6’5” Matt Reed of the USA, there would be over a dozen attempts to shake things up. None would be successful however until Reed’s fourth attempt with three laps remaining. On his wheel was another strong cyclist in Stuart Hayes of Great Britain. These two put almost a minute on the chasers by the second transition.

Their efforts from the bike showed though and the two soon became the chasers as the sport’s thoroughbreds took aim. By the end of the first lap there would be only six: Whitfield, Kahlefeldt, Frodeno, Gemmell with Jarrod Shoemaker of the USA and Javier Gomez of Spain.

A chess match of race tactics ensued with multiple surges testing each others’ legs over the next seven kilometres. With only 400 metres to go the six athletes would spread across the road seemingly waiting for the gun. Whitfield would be first to go followed closely by Kahlefeldt, Frodeno and Gemmell, leaving Shoemaker and Gomez behind. With only 50 metres left it looked as though Whitfield would be overtaken but with a grimace across his face, pulled a body width away at the finish line to take the $200,000 USD first place prize.

“It's been an amazing year with these sprint finishes and today I had a good one,” commented Kahlefeldt. “I felt really easy out there and thought I could win it, but Simon [Whitfield] used his experience and placed himself really well in the last technical section and there was no stopping him. Jan [Frodeno] and I always seem to come together this year and we got a bit close in the home straight, but that's racing."

"I felt great on the run, but today Simon had the edge,” added Frodeno. “We kept dropping him, then he would work back up and we couldn't shake him. He really did well in the home straight. Brad [Kahlefeldt] and I have raced really closely this year and we clipped heels in the last bit, but it's nothing really."