In Armstrong's return, it's all beginning to come together 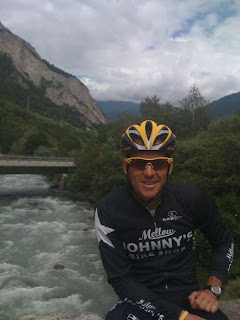 The longtime coach was on a semi-serious training ride with his once-superstar pupil in the Colorado Rockies last summer when the conversation turned to the subject of retirement.

Austin's Lance Armstrong, the seven-time winner of the Tour de France, had been watching his favorite race on television earlier in the day, and he told his coach that he was considering a return to competitive cycling after a three-year absence.

Chris Carmichael, who has coached Armstrong for two decades, was stunned.

At Carmichael's urging, Armstrong took a day to think it over. Then, Armstrong called his coach and reiterated his plans.

"Then I got really excited — this is happening again," Carmichael recalled last week. "This is really cool."

It is happening again.

On Saturday, Armstrong will roll out of the starting gate for the short time trial in Monaco that kicks off the Tour de France, a three-week grind of an endurance race that covers 2,173 miles across five countries.

Armstrong has won a record seven yellow jerseys, one of the most identifiable symbols in all of international sport. Despite dominating the race from 1999 to 2005, he won't be a favorite to stand atop the podium against the backdrop of the Arc d'Triomphe in Paris at the race's end July 26.

Instead, 26-year-old Alberto Contador, Armstrong's teammate on the Astana team, is the odds-on favorite, after winning yellow in 2007.

But what a wild card.

American Chris Horner, Armstrong's training partner and teammate, told The Oregonian newspaper that Contador is the team's leader — at least on the surface.

"Well, on paper it's pretty easy to see it's going to be Alberto Contador," Horner said, "but sometimes you gotta look a little further than the cover."

Italian Ivan Basso, who was runner-up to Armstrong at the 2005 Tour, has predicted that Armstrong will be a "rampaging beast" in France.

Added Carmichael: "I call him a long shot to win. But I've seen miracles happen. I saw a miracle happen in 1999" when Armstrong won his first yellow jersey.

"I've been very encouraged by his (training) data. Good signs are coming."

Armstrong, who said he is more relaxed than he ever was during his Tour winning streak, is less than three months away from his 38th birthday. The sport usually sends the top cyclists to an exit well before that age.

Armstrong was 33 when he retired the first time, telling a crowd of 500,000 in Paris, "Vive le Tour," before going on a vacation in southern France.

Eddy Merckx, Miguel Indurain and Bernard Hinault, who each won five Tours, left the sport at 32.

Belgian Firmin Lambot remains the oldest Tour champion. He was 36 when he won in 1922.

Italian Gino Bartali is the only rider in Tour history to win yellow jerseys 10 years apart, in 1938 and 1948.

Armstrong said his age hasn't played much of a factor in his comeback. He healed quickly from a broken collarbone in late March, riding in the three-week Giro d'Italia in May.

He's dropped 25 pounds during his comeback, including the muscle he'd gained in his upper body. He'll start the race at a stick-thin 160 pounds, his racing weight when he was dominant in the time trials and mountain climbs.

Armstrong's comeback also centered on his cancer-awareness and support foundation based in Austin and his plan to take its LiveStrong message global.

In the past year, he's talked cancer awareness with the prime minister of Australia and the president of Mexico and shared a press conference with the Italian foreign minister.

"We have already surpassed expectations," said Doug Ulman, president of the Lance Armstrong Foundation. "And he hasn't even started the Tour."

Armstrong, in his comeback, is proving to be as popular as he was in the midst of his seven-year Tour reign.

Nike, which has been a sponsor of Armstrong's throughout his professional career, is premiering a commercial tonight featuring the cyclist and several other athletes and actors. It's called "It's About You" and will run nationally throughout July.

Armstrong also has endorsements from FRS, an energy drink; Clear2O, a water bottle company; and Horizon Fitness, a line of cardio exercise equipment.

Bill Stapleton, Armstrong's longtime agent, said Armstrong's comeback will be the subject of a documentary, which will hit theaters next spring. A book of behind-the-scenes photographs from Austin photographer Elizabeth Kreutz will be on sale in December.

Meanwhile, at Armstrong's suggestion, he's receiving no salary from Astana. In his heyday, he earned a salary of about $4.5 million.

It's all beginning to come together, just as in his unprecedented string of Tour victories. From the training rides — Armstrong has been in Aspen the past month, riding at elevations of up to 8,500 feet to prepare for the Alps and Pyrenees — to his personal life — on June 4, he became a father for the fourth time when son Maxwell Edward was born.

All four of his children will be in Paris when the Tour ends. The three oldest — 9-year-old Luke and 7-year-old twins Grace and Isabelle — were on the podium with their dad in 2005.

Will there be another trip to the podium for them?

"I want to ride my best," Armstrong said last week, "win a stage, maybe be on the podium."

In conversations during his comeback, Armstrong seems to relish the idea that no one is giving him much of a chance of winning.

In past Tours, Armstrong was known for using slights from other riders — real or perceived — as motivational tactics.

Carmichael said the motivation this year for Armstrong is adding up to a "perfect storm."

"Nobody responds better than Lance when the odds are stacked against him," Carmichael said. "I think Lance scares the hell out of everybody."
Posted by Recovox at 9:24 AM