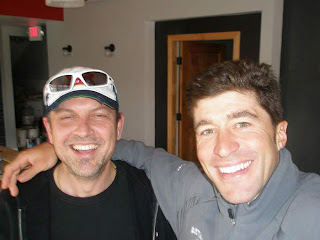 By: Cathy Mehl (Astana cycling)
In February Daniel Olivella and his partner our own Chechu Rubiera opened a tapas bar in the Bay Area of California, USA. We spoke with Daniel last week to catch up on how it's going with this new business venture. If you find yourself in the neighborhood of Oakland, be sure to visit Barlata at 4901 Telegraph Avenue, Oakland, California Phone 510.450.0678 www.barlata.com

Can you tell us a little about yourself, Daniel?

Daniel: I’m Daniel Olivella and I’m 47 years old. My wife is a teacher. I grew up in Barcelona, Spain and moved to Chicago, Illinois, USA when I was 18. I started to work in restaurants as a youngster in Spain during the summers. I believe I have been always in touch with food.

My uncle had two restaurants in Chicago so I was involved in a real learning process there, although I went to music school at the American Conservatory of Music, too. I ended up moving to San Francisco in 1989 to pursue a career as a chef here. I am currently involved with another restaurant in the city proper. It’s called B44 and also Barlata, which is located in Oakland.

How did you happen to meet Chechu?

I met Chechu during one of the old S.F. Grand Prix bike races. It was a great race through the streets of San Francisco. One of my customers was Dan Osipow and he worked for US Postal team at the time. He told Chechu to visit B44 to eat and he did. We started talking. He had gotten lost training and wanted to go on longer rides so I joined them the day after and just like that we became friends. I went to visit him in Asturias during the summer and then my wife Vanessa and his wife Laura became friends. Next we went back for New Years Eve, then they came to visit us in San Francisco and we developed a nice friendship. Next week we will meet in Spain.

How did the idea to do a restaurant together come about?

One day walking around his home in Pola de Siero we started talking about it. He grew up in a bar and liked the idea of investing some money in a business with me so we looked for a few years. We looked in Spain, Santa Barbara, Marin County, San Francisco…finally I found this spot in Oakland and we went for it.

In Barlata do you have any special cycling memorabilia?

I have a couple of signed pictures: one of the US Postal Service team during a time trial in the Tour de France and one with Chechu and Lance. Also a hat signed by all of the Tour of California riders. I also have a few signed jerseys: one from Alberto’s Giro win last year, one from another good friend Samu Sanchez from the Olympic gold medal win and one that Lance gave to Chechu in one of the Tours. Chechu also told me has a jersey signed by all the riders from this year’s Giro. Neither is on the walls yet because I haven’t had time, but they will be when I come back from Spain at the end of June.

Tapas bars are becoming more and more popular in California in the past five years or so. Why do you think it took so long for them to catch on here? Were they popular on the east coast of USA and just not the west coast, or are tapas relatively new to the USA?

I really have no idea. Perhaps we had sushi, Californian cuisine, Mexican and all others before the people on the east coast. All I can say about that is that I am glad I am here now, doing tapas.

How do you feel it’s going at Barlata? You’ve been open a few months now, what has the response been to the restaurant?

It is going great. We are getting our first reviews and I am very happy with them* They talk about Chechu and Lance. In the middle of the biggest recession opening a restaurant is not easy even with all the good press we are getting. You have to be professional and bring something unique.

I understand the seating is family style, where you sit at a community table with others. This always promotes a more festive and lively atmosphere. How has it worked out at Barlata? Why did you decide on community style—is this also traditional in tapas bars?

We wanted to do a casual yet good tapas place. We have a long communal table for 20 and 17 tables of 2 plus the bar stools. I like the festive ambiance it provides.

Do you have some dishes that are your signature dishes? What are some of your favorites?

Lots of signature dishes: fish cheeks, squid ink paella, roasted monkfish, grilled sardines… all of them are special and unique.

How did the idea of the tin cans come about? Is that traditional for tapas? Do you have the cans now and are people collecting them?

My wife Vanessa inspired me on the cans. Traditionally cans are considered gourmet food in Spain and usually only the best quality of octopus, peppers, clams etc get stuffed in a can. There are some tapas places that don’t even have a kitchen: you choose the can and the wine. But here we cook the dish and only present it in a can.

Chechu is such a kind person and always a gentleman. What is he like as a business partner?

Chechu is an amazing person. Foremost he is one of my best friends and then my partner. I can tell you that he was more excited than me during this project!

He told us he might have to come wash dishes in the off-season!

If Johan does not give him a good contract I told him he will always have work here, starting from the bottom…

You have another restaurant in the city—what is this restaurant like? And where does the name come from?

The one in the city is a bit fancier but the same taste of food as my food here. The name comes from the address of 44 Belden Place in San Francisco, California. A little advance notice for you-- we might start researching this summer for a space in Austin, Texas for a possible Barlata #2 in 1 to 1-1/2 years.
Posted by Recovox at 10:34 PM