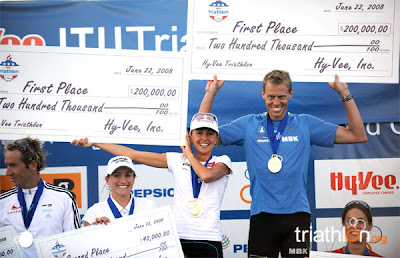 The ITU circuit moves across the USA from Washington, DC to Des Moines, Iowa for the Hy-Vee Triathlon Elite Cup and Triathlon Team World Championships.

With the largest prize money for any triathlon race in the world on offer, the big guns are eyeing up the $200,000 first place positions, making Hy-Vee one of the most sought after and exciting competitions for spectators and athletes alike. However the athletes will have to battle the oppressive conditions as well as each other with temperatures likely to peak in the mid-thirties on race day.

The men’s race draws in the Olympic medallists, Jan Frodeno from Germany, Simon Whitfield from Canada and New Zealand’s Bevan Docherty, as well as 2008 world champion Javier Gomez from Spain. Gomez faired the best last weekend at the Dextro Energy Triathlon – ITU World Championships with a second place finish, with Frodeno the strongest of the chase pack in sixth. Both Whitfield and Docherty failed to finish, with some observers speculating that they might be saving energy for this weekend’s onslaught.

The Aussie pairing of Commonwealth champion Brad Kahlefeldt and the ever reliant Courtney Atkinson will look to take the cash back Down Under, although New Zealand’s Kris Gemmell will have other plans.

Home support will rest on the shoulders of Jarrod Shoemaker who looked strong in Washington to clock a top ten finish. Andy Potts and Hunter Kemper, who were fourth and fifth in DC, will save their energy for the team championships.

A strong European contingent will be looking for success despite the race coming just a week before their continental championships. Russia’s Dmitry Polyansky returns to action following victory in last weekend’s European under 23 Championships and will line up alongside the up and coming Ivan Vasiliev. Will Clarke and Tim Don spearhead the British assault in the absence of double World Championship winner Alistair Brownlee, whilst Africa’s sole representative, Hendrik De Villiers from South Africa, will hope to perform better than in Washington where he suffered mechanical failure and a crash on the bike.

The big question in the women’s race centres around whether Emma Moffatt can beat compatriot and Olympic gold medallist Emma Snowsill for the second weekend in a row.

The Australian pairing have dominated the Dextro Energy Triathlon – ITU World Championship Series thus far this year, although few expected Moffatt to outrun Snowsill in Washington, DC. With the seemingly invincible triple world champion suffering her first defeat to anyone other than Vanessa Fernandes since 2005, can Snowsill register her second Hy-Vee win?

Laura Bennett delighted the American fans as she crossed the line in first place at Des Moines in 2006, although a repeat performance looks unlikely as she continues to come back from a prolonged injury. Sarah Haskins might be USA Triathlon’s best shot at a medal having finished fourth last weekend in Washington.

With Switzerland’s Daniela Ryf, the 2008 under 23 world champion, finding some excellent form in Washington, a repeat performance for her would guarantee a big pay day, whilst her training partner, Lisa Norden from Sweden, will be hoping that the cramping she suffered on the run in DC will not return come Saturday.

Japan’s Juri Ide usually races strongly in the warmer climates, and the Beijing Olympic Games fifth place finisher could cause an upset on race day. Her team mate, Kiyomi Niwata, has shown some good form this year and her experience could pay dividends.

Britain’s 2008 world champion Helen Jenkins put herself back in the running following a fifth place finish in Washington as she looks to find the form that gave her third place and a cheque for $25,000 at last year’s race.

An outsider for a good result may be Lauren Groves from Canada who ran through to tenth place in Washington, posting the third fastest run split behind the two Emma’s from Australia. She will line up alongside Kathy Tremblay who has already shown some fine form with a fourth place finish at the Tongyeong World Championship race in Korea.
Posted by Recovox at 10:45 AM