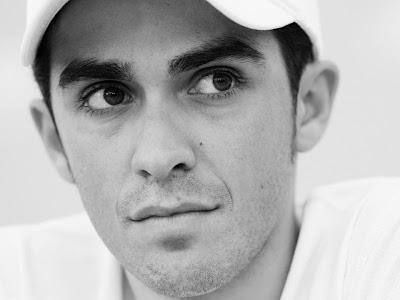 Benjamin Noval became an essential rider to Alberto Contador when he made his first conquest in the Tour in 2007. Since then, the Asturian has assumed the position of right-hand man wherever the climber from Pinto has participated. Last year he helped him win the *Giro and the Vuelta a España, and since the first of this season they’ve told him that they’re counting on him for the Tour.

Powerful rolleur, bodyguard deluxe at crucial moments, Contador’s “shadow” has carried out the same plan as his team leader. That leader has always counted on Noval, until yesterday Johan Bruyneel told him that the Asturian will not be along for the trip to the most important race in the world.

“For the good of the group, I’m not taking you.” This was the only explanation that Bruyneel gave Noval for drawing up a team consisting of Contador, Armstrong, Leipheimer, Popovych, Zubeldia, Sergio Paulinho, Dmitriy Muravyev, and the Swiss rider Gregory Rast, who has displaced the Asturian.

“Now I’m having an anxiety attack, because the only explanation that I’ve received isn’t convincing, nor is it based on sporting reasons,” explained the rider who, after months of preparation has seen his work ruined.

“My morale has hit rock bottom, because I sincerely believe that Alberto needs me. My work is to protect him, to prevent crashes. Now he’s left with only Paulinho, whom he also trusts.”

Noval understands that the team is committed to Kazakhstan and needs to include a rider from that country (Muravyev) in the “eight” bound for the Tour. He’s also aware that Bruyneel had a tiff with Lance Armstrong because the latter wanted to insist on including a third American and special helper of his, Chris Horner. Bruyneel did not consent and, feeling duty-bound to the prinicple of fairness, threw out Noval. “I want a more international team,” he said.

But the Asturian, who has both roomed with Contador on the road and joined him in training camps in the Pyrenees and Alps, knows that a three week race is very long time for a rider who is battling for the overall victory.

“I’m a nervous wreck, because I see that they’re not treating Alberto like the great rider he is. They don’t value him as a Tour winner, because the least they can do is ask him what he needs. I know that he’s very hurt, but what he must do now is forget all about it and concentrate on winning the Tour. It’s the best thing he can do. (Agustí Bernaus, sport.es)
Posted by Recovox at 9:31 PM