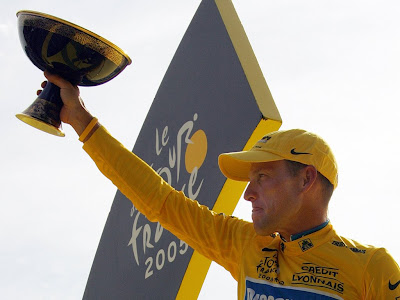 SEVEN-TIME Tour de France champion Lance Armstrong says last year's race was a "a bit of a joke" and has revealed that watching it unfold helped convince him he could win it again.

It was won by Spaniard Carlos Sastre from Australian Cadel Evans, Austrian Bernard Kohl - who was later suspended for doping, Russian Denis Menchov and American Christian Vande Velde. But in a new book, Lance Armstrong - The World's Greatest Champion, Armstrong makes it very clear he believes that, had he still been racing, he would have won the Tour again.

While his comeback to racing is aimed at promoting his Livestrong global cancer awareness campaign, he also makes it clear that the goal of winning an eighth Tour title was a huge motivating factor in his return.

That challenge confronts him next Saturday when he and 179 riders line up for this year's Tour that starts in Monaco and finishes 3500km later on the Champs Elysees in Paris on July 26. Interest in Armstrong's return at the age of 37 will be massive.

In the book, Armstrong also reveals the strength of his belief that his winning days are far from over.

"I'll kick their asses," he told author John Wilcockson in a conversation soon after last year's Tour while discussing his planned comeback. "The Tour was a bit of a joke this year. I've got nothing against Sastre … or Christian Vande Velde. Christian's a nice guy, but finishing fifth in the Tour de France? Come on!"

Armstrong also reveals his anger for the way in which the US television network Versus covered the Tour, and how it portrayed his sixth and seventh Tours in 2004 and 2005.

Armstrong, who has faced constant doping allegations despite never testing positive, is also keen to prove he is clean and hopes by racing the Tour again his four children will read about it.

"I'm doing this for my kids," he says in the book.

"With news so accessible these days on the web, they'll be able to read any story they want. And I don't want them growing up and reading all these things about me and doping."

Armstrong will not start the Tour as the Astana team's leader - at least officially. The leader will be Spaniard Alberto Contador, the 2007 winner who did not race last year as the team was not invited due to its implication in doping scandals under a former management.

Astana named their nine-man line-up, regarded as the team to beat this year. With Armstrong and Contador will be American Levi Leipheimer who was third in 2007 and German Andreas Kloden who was second in 2004 and 2006, as well as domestiques Yaroslav Popovych, Haimar Zubeldia, Sergio Paulinho, and Gregory Rast and Dimitriy Muravyev.

Astana team manager Johan Bruyneel said Contador had earned the leadership role this season, but many are forecasting a fall-out between the pair if Armstrong gets a sniff of a win.

Armstrong said this week that he doesn't care what number he has on his back. He was also interested to read a report of rumours that Contador was ready to join the American Garmin-Slipstream team if Astana's recent financial woes not corrected and the team disbanded.

Had the team folded, it was reported that Contador would not race in a proposed Livestrong team that would replace Astana and include Armstrong and those closest to him in the team.
Posted by Recovox at 8:40 PM