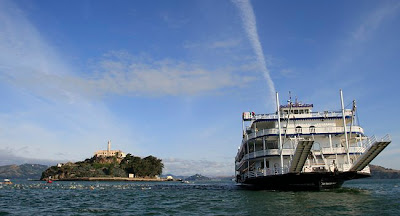 The day at the Escape From Alcatraz threw athletes the usual tough conditions in front of the beautiful backdrops of downtown San Francisco, Alcatraz Island and the Golden Gate Bridge. In the end, Americans Andy Potts and Mary Beth Ellis walked away with the victories.

While athletes were relieved to find that the water was relatively mild at 59 F, the relief ended there. The currents were stronger than usual, making it very difficult to navigate a straight path through the 1.5-mile swim course. The slower swim times were evidence of the tough currents.

Australia’s Clayton Fettell led the men out of the water in 30:37. He was followed by American Dustin McLarty and Potts just seconds later. Potts made a statement early on the bike that he would fight to retain his title. Potts hammered through the bike, finishing the second leg in field-leading time of 45:40 and heading into T2 with nearly a three-minute lead over fellow American David Thompson.

Once on the run, Potts kept a steady pace over the eight-mile course to earn him his third-straight victory at Alcatraz with an overall time of 2:07:25. Thompson worked quickly on the run to cut into Potts’ lead. While Thompson and New Zealand’s Graham O’Grady ran quicker than Potts, their efforts only cut a slight chunk out of Potts’ overall lead. In the end, Thompson finished second at 2:09:51, with O’Grady taking third at 2:10:37. 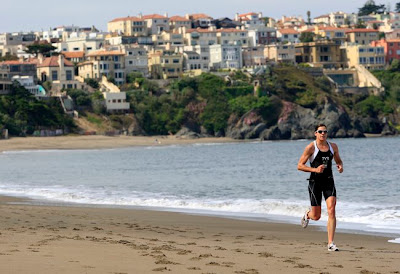 The pre-race story for the women was the battle between three former champions in Australia’s Michellie Jones, Great Britain’s Leanda Cave and the United States’ Becky Lavelle. The former champs did not disappoint Lavelle led the women out of the water with Cave, American Jasmine Oeinck, Ellis and Jones following close behind. The women’s battle remained tight throughout the race, but Ellis managed to take the lead early on the bike. Ellis’ bike split of 51:07 was the fastest of the field by nearly two minutes, putting her in the second transition in first place.

Ellis stayed strong on the run, with Cave and Lavelle hot on her heals throughout. The three climbed the infamous sand ladder only 20 seconds apart of each other, making for an exciting finish. In the end, Ellis pulled out her first victory here with a time of 2:21:23. Cave crossed the finish line in second at 2:23:02 on tired legs after competing in last week’s Revolution3 triathlon. Lavelle came next at 2:24:00.