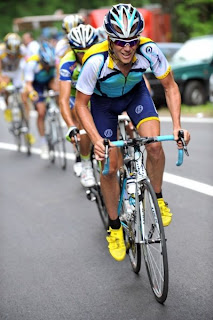 American Chris Horner is back on his bike and confident he will make Astana’s Tour de France squad come July. He’s less sure about when his next paycheck might arrive.

Horner, 37, had the strongest grand tour performance of his career in May at the Giro d’Italia, where he rode in support of compatriot Levi Leipheimer until abandoning the race at the start of stage 11.

Prior to crashing on a descent early on stage 10 — a stage he completed with a hairline fracture in the lateral tibia plateau of his left leg — Horner appeared to be one of the strongest men in the race. He made the elite selection on the slopes of Alpi di Suisi on stage 5, alongside podium finishers Denis Menchov (Rabobank) and Danilo Di Luca (LPR Brakes) and ahead of GC favorites such as Franco Pellizotti (Liquigas) and Michael Rogers (Columbia-Highroad).

The accelerations by Ivan Basso (Liquigas) even shed 2008 Tour de France champion Carlos Sastre (Cervélo TestTeam), who went on two win a pair of summit-finish stages. But not Horner.

“It was Basso, Di Luca, Menchov, Levi (Leipheimer) and myself at the front,” Horner said of the climb to Alpi di Suisi. “Everyone else had been dropped and got back on because of tactics. There were only the five of us up there the whole time.”

Horner also went on the move on stage 8, following attacks by former Giro winners Stefano Garzelli (Acqua & Sapone) and Damiano Cunego (Lampre), into a break that also contained Pellizotti and Rogers. Horner sat on the group until Leipheimer bridged across with Edvald Boasson Hagen (Columbia-Highroad). Horner then drove the promising breakaway over the Cat. 2 Colle del Gallo summit until Di Luca’s LPR team ultimately brought it back.

Two days later Horner crashed on the route from Cuneo to Pinerolo, and though he was able to finish the stage, he abandoned the following day. His crash was a double blow: Leipheimer lost his most valuable lieutenant, and Horner lost the chance to shine for the remainder of the race following what he called “the best 10 days on the bike of my entire career.”

“No one even got to see what I could do at the Giro,” Horner said. “We weren’t allowed to attack until after the (stage 12) time trial. My job was to save energy in case Levi won the TT and was in the (leader’s) jersey. I was there to lead him up last climbs, and I completely agreed with the team tactic.

“But up until I crashed, I was never under any real hurt where I was going to be dropped. What I saw was Sastre was ridden off my wheel. At that point, no one at the Giro was riding better than I was. Maybe later on during the race the form changes, but I normally get better during racing, not worse.”

Prior to the Giro Horner had said he’d gone to April’s Tour of the Basque Country with excellent form before crashing out with a broken collarbone and several broken ribs.

Asked why he is riding so well at an age when many riders have called it a career, Horner said his racing weight is lower than it’s ever been.

“At the Tour of California one of the team physio guys was laughing that I was too fat,” he said. “After California I had two weeks off with a broken knee, and I quit eating all fast foods and lost some weight. I am 139.5 pounds now, where in the past the lowest I’ve weighed is 145, and I’m usually racing at 148 or even 150 pounds. It makes quite a bit of difference.”

Horner said dropping that sort of weight doesn’t come quickly, and can carry a cost.

“The trick is you have to lose it slowly,” he said. “It didn’t happen in one week. It happened over a six-week period from California to the Tour of the Basque Country. You have to cut just about every extra calorie and still be training hard. Some days maybe I cut too many calories and paid the price in training the next day. But it has made a big difference.”

Horner clarified that he hasn’t been going hungry because of Astana’s recent financial woes, but said the uncertainty surrounding his salary has added undue stress to his racing season.

Horner added that Astana team manager Johan Bruyneel “is taking care of it, and he’s keeping all the riders in the loop.”

Asked how the financial stress and injuries have affected his season, Horner said the setbacks have only made him train harder.

“Going to the Giro I thought it might be my last race in Europe,” Horner said. “(Team management) said, ‘Listen, do what you have to do, look after the team, and get some results if you can.’ My attitude was to enjoy it and have it a good time. But yeah, I was also worrying about feeding kids and paying the bills.

“I would be very surprised if they didn’t take me,” he said. “My leg is still not 100 percent, but there’s no pain and I am already training. I haven’t felt any pain with the small rides I’ve had, so four- and five-hour days should be no problem.

“I’m assuming the only thing to hold me out of the Tour de France is if I come back from a five-hour training ride and my leg is still wrecked. But that’s why I took two weeks off the bike. This week I’ve been doing two- and three-hour rides super easy, but that still leaves me four weeks before the Tour.”

Bruyneel clearly sees Horner’s value. On his blog, he wrote: “I do think the biggest disappointment (of the Giro) wasn't Levi, but rather losing Chris Horner to another injury. After a year of injuries, Chris showed up motivated and in great condition. He was a very big key to Levi's chances of winning or a podium placing. Chris is a big talent and really can do anything asked — chase on the flats, go up the climbs with the leaders, provide good morale and team atmosphere, etc. If he recovers nicely, he'll definitely be a strong candidate for the Tour team.”

In Horner’s mind, he’s more than just a candidate. “I expect to be at the Tour de France, to help Contador or Lance win the race,” he said. “I would find it really strange if I wasn’t selected. The team knows I will ride 100 percent. I love this team, and I think they’re pretty happy with me as well.”
Posted by Recovox at 6:48 PM