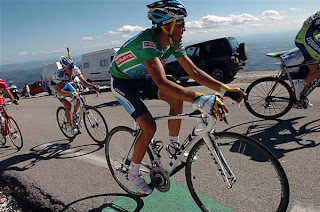 Alberto Contador continues his quiet build-up to the 2009 Tour de France at the Dauphiné Libéré, laying low even at yesterday's mountain top finish on the Mont Ventoux. The Astana rider refrained a chance at victory on the 'bald giant' and stayed on Australian Cadel Evans' wheel to finish eighth of the stage 2:13 down on the day's victor, Sylvester Szmyd of Liquigas.

"Since the start of the race, it was my intention to preserve myself," the Spanish 2007 Tour de France winner said. "I think about the Tour and don't want to punish myself here."

The fifth stage of the Dauphiné ended on the famous Mont Ventoux in Provence, a climb that will be the last decisive mountain top finish of the Tour come July.

"As usual the Mont Ventoux was very windy in the last kilometres," continued Contador. "The wind influenced the stage a lot - because of this the leader's group was together. Because those riders who tried to attack paid for their efforts in front.

"I didn't want to start the fight, it wasn't my war. Moreover, Haimar [Zubeldia, his teammate - ed.] was out front, so this lifted any remaining doubts."

Still, Contador remains in an opportunistic position on general classification, third at only 1:04 off the new race leader, Alejandro Valverde of Caisse d'Epargne. But this did not seem to motivate him.

"I will continue to try and not whip myself too much in this race," he said. "To do as well as possible, like today [yesterday], but without wasting more energy than necessary.

"I'm happy with this result, which was what I expected. In this race, I can allow myself to hold back a little. I didn't feel super, but it was what I hoped for: if I was at a hundred percent already, I might not actually make it to the finish when we climb this mountain again in five weeks time."
Posted by Recovox at 10:44 AM