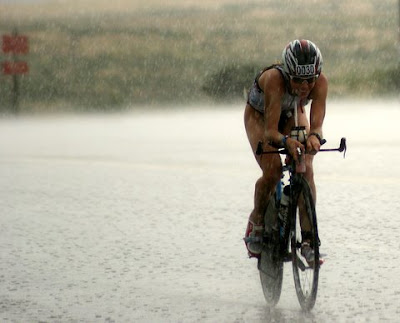 My first 70.3 win was an experience that will stay with me forever. It was quite a gift because it happened on my favorite race course. I got to savour the last hundred meters running through the outstanding crowd that animated the heart of Boise on Saturday.

It was a wonderful conclusion to a race that felt just like a dream from start to finish. It seems like the wonderful Boise race is getting better every year.
It all started with sunny conditions in the beautiful lucky peak reservoir. As we treaded water waiting for the gun, I remember everyone around me was laughing and smiling. The afternoon start seemed to have lead to a relaxed atmosphere… although those smiles may also have been smiles of relief as the water was warmer than it was for last year’s freezing swim session!

At the sound of the gun, we were off. I was not surprised to see Brooke Davison take the lead right from the start. That was good because I could focus on her incredible speed to bring up my pace. I soon found myself in a three girl group with Samantha McGlone and Annie Warner, pushing through the choppy water.

I was excited to come out of the water in second place and I was looking forward to the hilly bike course. I felt confident and had one thought on my mind: There was only one person to pass before I made it to the head of the race. I had a discussion with my Lifesport coach Paul Regensburg the night before the race and he had explained to me that there is something magical that happens at the front of a race and at that moment I had decided I wanted to have a taste of it. Samantha had a quicker transition, but I passed her on the elevated road across the dam on the way out of transition, determined never to look back and go for the magic feeling. I just had to look ahead and push as hard as I could. Right after crossing the dam, we headed down a nice descent, which would be the first of many on the bike course that takes you to a tour of the Boise country side. I decided to push until I passed Brooke and took the lead, that is when I felt all that magic and realized how once you have a taste of the lead it is very hard to let it go!

I worked hard, knowing I was in first position. I knew Linsey Corbin and Samantha McGlone would be strong on the bike course.

The bike was a solitary battle with the elements. It was a fight through the thunder, lightning, hale and rain. Everything was there to make the journey feel epic. I have to admit I was quite surprised to be alone in the lead, heading down the last long descent to transition. Was this for real? How close were the girls?

When, out of the transition, I heard I had a big lead, I was so surprised. I knew I was going to have a good run. I still didn’t know exactly how far ahead I was, but I knew Samantha and Linsey would be factors on the run.

But my dream scenario was there and I worked to follow the plan and make it a progressive run. I started to get worried when I found myself counting porta-potties rather than miles, and was afraid of the consequences of downing my favourite caffeinated gel. I decided I would have to elaborate a bathroom strategy. I was going to have to compromise for bathroom time and that was a scary thought. After hesitating through five aid stations, I finally made a desperate attempt at the fastest bathroom split of my life. I now laugh when I think that a 22-second split was recorded on that stop (definitely a PB). The turnaround after loop one was right by the finish line which was a great chance to resource, passing through the roaring crowd. There were so many positive people that had made it to downtown Boise to cheer us on in the rain. One man stood out, yelling on the way in ‘do it for a double cheese burger’. And on the way out ‘with bacon and extra cheese.’

That actually was an interesting motivational approach which I used to push up the pace. With one lap to go, I was still feeling strong and couldn’t believe it. It is at the five km mark that my legs really started feeling weaker and I had to concentrate to maintain my pace. I finally made it to the unforgettable moment: that final run up to victory. Making it to the finish line first is simply an indescribable experience.

What a wonderful race with my amazing teammate Linsey Corbin, who finished second. Nice comeback from injury!

I really want to thank my coach Lance Watson for the great work we have done together this year. Thanks to him, I shaved 20 minutes off last year’s time. I have been blessed with an amazing coach and inspiring new team.
Posted by Recovox at 10:45 PM