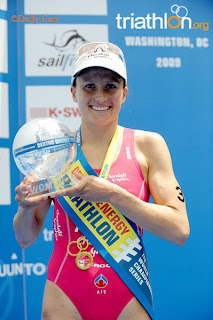 In the women’s competition all eyes were on Emma Snowsill, the Olympic champion. Having not lost a race since September 2007, and not lost to anyone other than Beijing silver medallist Vanessa Fernandes since 2005, she was expected to clock her second win of the Dextro Energy Triathlon – ITU World Championship Series.

However her training partner and compatriot Emma Moffatt had other ideas as she rallied strongly in the swim with the American contingent to forge a breakaway, much like in the men’s race.

A small group managed to open an advantage coming onto the bike as Moffatt partnered up with 2008 world champion Helen Jenkins from Britain and Madrid winner Andrea Hewitt, amongst others. Snowsill found herself caught between the leaders and the chase pack and worked hard to try and close down the front group, but to no avail.

Luckily for the Aussie she was swept up by Switzerland’s Daniela Ryf and Sweden’s Lisa Norden who were driving the pace of the chasers. Their tireless work combined with the lack of structure of the front runners meant that they were able to reel and catch the breakaway by the halfway point during the 40km cycle.

Once back together the American pairing of Pan American champion, Mary Beth Ellis, and 2008 world championship silver medallist, Sarah Haskins, delighted the home support by putting in an injection of pace to open up a lead of 35 seconds which they carried into second transition.

Behind them Moffatt stormed through the transition area and started strongly to chase down the Americans whilst Norden tried to retain contact whilst Snowsill suffered a poor change over and settled into an easy pace alongside Ryf. They soon caught and passed Ellis who was struggling from her exertions on the bike, but only Moffatt was able to overtake Haskins, as she took the lead after a couple of kilometres.

Norden dropped to the side of the course with cramp and lost second place to Snowsill who made her move at the halfway mark. The slight Australian looked to be running well, however the gap to Moffatt had grown too large and she was unable to make much of an impression in the leader’s advantage. Ryf and Haskins duelled it out to complete the podium with the Swiss reigning under 23 world champion finally breaking the American’s resolve with a turn of pace 2.5km from the finish.

Moffatt was able to enjoy the moment as she crossed the line in 1:59:55, some 25 seconds ahead of Snowsill. Ryf finished third with Haskins mirroring the USA’s best men’s performance with fourth. Jenkins held off Hewitt for fifth with France’s Jess Harrison taking seventh ahead of Japan’s Juri Ide. Sarah Groff placed ninth for the USA with Canada’s Lauren Groves clocking the third fastest run split to move from the distant chase pack into tenth.

“Washington DC is a spectacular place with the history and monuments, although I didn't get a chance to take a look during the race,” joked Moffatt. “I'm really happy with how it went today; it's a hard year and you have to keep smart with your training and racing to be successful. It's nice to know when you take the run out that hard, and to know you're not hurting at all, that no one is catching you. It's a great feeling!”

“I think the ride was really where the push began,” explained Snowsill. “There was even a surge in the swim right off the bat and those girls really pushed the pace to close that gap on the bike. Even then once we were together people were trying to make breakaways so we were all going really hard. It was surprisingly windy out there and we were all just hoping that the clouds didn’t have any rain; thankfully they held off which was really great because that makes for such much faster racing for us.”

“It was a pretty rough swim with the current. I tried a couple of times to get away on the bike but with no luck,” said a delighted Ryf. “The run was fantastic as I managed to stay with Emma [Snowsill] for the first 5km and I am incredibly happy with my race. My finish gives me a lot of confidence. To stay and run with an Olympic champion is pretty amazing. I knew that I had to do a lot of work to keep with the best girls in the world and today I did.”

Brownlee’s victory also took the Brit to the top of the Dextro Energy Triathlon – ITU World Championship Rankings after the first three of the eight races. He displaces Russia’s Dmitry Polyansky who won the European Under 23 Championships in Italy the same weekend as the Washington race. Australia’s Brad Kahlefeldt managed to hold on to second ahead of compatriot Courtney Atkinson in third.

Moffatt moved into the top spot as the extra points she accumulated at the Mooloolaba World Cup triathlon took her clear of Snowsill despite them both registering a first and second from the first three races. France’s Jess Harrison slipped one place to third with Juri Ide retaining fourth.