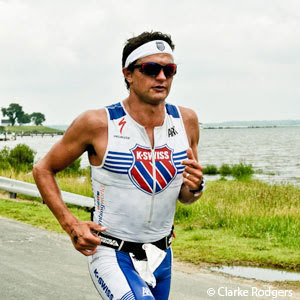 Overnight thunderstorms gave way to overcast skies race morning. The water remained calm for start of the 18th annual race held in Cambridge, Maryland. A 74-degree water temperature prohibited the pro field from wearing wetsuits. A strong headwind during the last half of the bike provided an additional challenge on the flat course.

Bozzone, who finished second in last year’s race, looked to lead from the start, exiting the water first in a quick time of 23:36. American Holden Comeau and Richie Cunningham exited second and third and trailed by less than a minute.

Bozzone maintained a lead on the bike, clocking the top bike split of the day at 2:08:12 and establishing a 2:36 lead onto the run. American Michael Lovato quickly gained ground on Cunningham, exiting the bike just one second ahead.

“Lovato kept a good pace. I stayed with him for about 15 miles,” said Cunningham. “I thought I would be dead on the run.”

Several miles into the run, Cunningham regained his second place position. Feeling strong, Cunningham picked up the pace for the last three miles, closing the gap to 16 seconds. Cunningham’s 1:13:25 run split wasn’t good enough to beat Bozzone’s 3:51:11 overall time. Cunningham finished in second at 3:51:27. Lovato held on for third at 3:56:50.

While Carfrae is not normally considered the strongest swimmer of the pack, she gained an early advantage by beating both Badmann and Maryland-native Desiree Ficker on the swim. Badmann used her powerful biking skills to take the top spot about 35 miles into the bike, clocking a 2:16 split, and heading onto the run with a four-minute lead.

Like Badmann is known for her biking skills, Carfrae is known for her running. She hit the run hard out of T2, regaining the lead at mile six and clocking the fastest women’s run split at 1:19.33.

“I thought if I felt good on the run I could catch her (Badmann),” said Carfrae. “Once I caught her, I never felt threatened in the lead.”

All participants were treated with generous Maryland eastern shore hospitality. The town of Cambridge once again came out in full-force to support the triathlon. Local residents, businesses and organizations hosted athletes, assisted in monitoring the swim in canoes and kayaks, and provided water and ice and manned aid stations throughout the day.