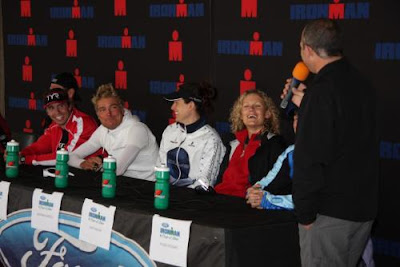 There are twenty-seven men in the professional field – three of those hold Ironman titles from last year.

Multiple Ironman champion, Bryan Rhodes only knows of one way to race, and that is all out. We can expect more of the same on Sunday from the New Zealander.

Francisco Pontano, the 2008 Ford Ironman Lake Placid champion, possesses a potent swim and bike combination and used this to gain his first Ironman title last year. The Spaniard’s game plan has been to blast the swim and bike and hang on for the run.

One cannot discount the blazing foot speed of Germany’s Maximilian Longree. He ran a 2:43 in the 2007 Ironman Austria; the fastest run split by over nine minutes. Last year, he ran the marathon fifteen minutes faster than anyone else on his way to his win at Ford Ironman Louisville. Watch for Longree to make a charge for the lead in the mid- to late-stages of the run.

Two American’s to watch this weekend are James Bonney and T.J. Tollakson. Bonney will likely work with Pontano in the swim, as they did at Ford Ironman Lake Placid last year. Tollakson should be with the next pack waiting to display his superior bike strength, which he hopes will propel him amongst the leaders starting the run.

In the women’s race you have to put Canadian, and defending Ford Ironman Coeur d’Alene Champion, Heather Wurtele as the early race favorite. Putting her career as a molecular scientist on hold this year, the 6” 2” former rower has been training in the warmer climate of the southern United States over the winter in preparation for this years race season. At Ford Ironman Coeur d’Alene in 2007, Wurtele was the first women to cross the line in the men’s only professional race. With her win here last year, you cannot fault her for believing that she has “home field advantage.”

Last year, Wurtele secured her first Ironman win with a “wire to wire” lead that was setup with an outstanding swim and bike. Heading out on the run with a fourteen minute lead, Wurtele was allowed to cruise the run unchallenged. Will she be afforded the same luxury this year?

Australia’s Kate Major always has to be considered a favorite in any Ironman she starts, and rightfully so. Once out of the water, Major has some lethal weapons to throw at her competition: her bike and run. Beyond her curly hair and her infectious smile lies one of the toughest competitors on the Ironman circuit today.

Another two-time Ironman Champion, Italy's Edith Niederfringer, has raced fifteen Ironman races since 2002, four which have been the Ford Ironman World Championships. In the eleven non-Hawaii races, she has finished in the top three ten times. Niederfringer comes from a swimming background and can back her excellent swim with solid cycling and run splits.

Another podium contender is American Amanda Lovato. She has been training hard all winter in a "training camp" environment and recently had a solid race at Ironman 70.3 St.Croix. Her coach, Cliff English, says “she is fit, confident and hungry for this race.”

Some “dark horses” in the women’s field include Ironman veteran, Katja Schumacher and California’s Tyler Stewart. Schumacher has four Ironman wins to her credit and the German has many years of experience. Stewart posted two top-three finishes in her first year racing in the professional ranks but has been battling some health issues of late.
Posted by Recovox at 7:21 PM