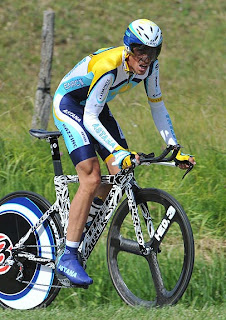 An interesting few days lie ahead of Alberto Contador following today's time trial at Valence where the Spaniard had to give away 44-seconds to his closest rival, Cadel Evans. It is almost that exact same difference overall that Contador needs to take back as the Dauphiné heads into the mountains tomorrow - is Astana's team leader up to the challenge? Alberto looked to be struggling in today's windy test on a flattish course that clearly favored Evans and men with bigger leg-muscles, but the mountains are where men with skinny legs and big hearts take on an altogether different character. And where better to start the ball rolling than on Mont Ventoux? If the wind that was bellowing across the Rhone Valley is still in force tomorrow, the stage could be a grueling test for anyone not up to it, and that's before the legendary climb is even reached!


There's a far different platoon of Astana riders here than were at the Giro, a mixture of Kazak youngsters like Renev and Dyachenko and Spanish hardmen Noval, Hernandez, and Zubeldia who, together with Portugal's Sergio Paulinho, can take Alberto to the foot of the Ventoux as if he was on a comfy sofa. Once there - assuming Renev and Dyachenko have given their all on the windswept plains of Provence - it is Hernandez, Paulinho and Zubeldia who will be with Alberto the longest. Given the relative weakness of the Silence-Lotto team, the Astana boys could really work Evans over before the final crux of the mountain begins just after Chalet Reynard.

Evans is a tough guy to lose all the same, and I think we are looking at a battle royale between the two men, with a prestigious stage-win up for grabs as well as that yellow jersey. Alberto can race as hard as he wants tomorrow, knowing he has another chance on Saturday's stage if he doesn't manage to take enough time tomorrow. And let's be honest, although Alberto is far from the form he needs to win the Tour de France, he did more than enough today to set up a Dauphiné victory.
Posted by Recovox at 2:39 PM