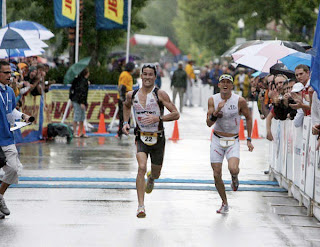 Every time I get to race against the Worlds best I learn so much and improve my game. I put myself in this situation as much as possible because that is the only way I will improve and beat them. I look forward to the many more times I will compete against the best this year as I prepare for the Ironman World Championship in October.

Two weeks ago I raced in Kona to get another opportunity to race in the conditions I will be dealt come October and with the current World Champion, Craig Alexander. The Honu Ironman 70.3 is a great race with the swim at the world famous Hapuna beach. I had a good start and found myself leading the the main pack throughout the whole swim trying to limit our losses to the sole swimmer in front, who was a past Olympic Trial swimmer. Once onto the bike I found my rhythm and headed up to Hawi solo. I felt good and went with what my legs were going to give me on the day. Being in the front you never really know what your advantage is, and once onto the run a couple miles I found out I had a 7 minute lead on group including Craig. The run was mostly on the golf course winding through the cart path up and down very steep hills and switchbacks with plenty in the deep humid Hawaii grass. The few miles we got on the road was basically a black lava field where the sun radiated and temperatures soared. It quickly reminded me why it is important for me to acclimate to these conditions before the World Championship in October. The heat got to me quick and I started to faultier rapidly and found myself just trying to survive. Craig showed why he is the World Champion and ran me down and took the win. It was a race that was frustrating to me and I left there wanting more and was disappointed with the result.

With that race behind me I was looking forward to a rematch with Craig this last weekend at Ironman Boise 70.3. I was determined to force him to dig deep again and see if I can find a kink in his World Champion running armor. What will it take to beat him at these events and what will it take to beat him come October. I was really looking forward to this race knowing I had a lot more in me then what I showed in Kona 2 weeks earlier.

Two O’clock Saturday afternoon came and we were off in a chilly lake outside of downtown Boise. I had another good start and was 3rd in line behind Brian Lavelle. I felt good and figured it would be one long line of all the professionals coming out of the water. Once we hit the beach I found out it ended up being a select group of 5 that lead the swim, including Brian, myself, Craig Alexander, and Joe Gambles. Once on the bike we quickly found that it was going to be a very windy day on the bike. Clouds were rolling in and we started to get hit with some strong rain in small pockets. After 5 miles or so I was in the lead and pulling away on my new Trek time trial bike. Amazing bike giving me some unfair advantage. Nothing in the world is as fast as this bike. I found good rhythm and was enjoying the tailwind sections as I was riding at close to 37 mph on the flats. At about halfway into the bike leg I knew I had a good lead because I couldn’t see anyone on the long stretches of road. I then started to monitor my effort and make sure I didn’t use to much effort riding so I could have a good run, which I knew I would need to beat Craig. Again, being in the front you have no idea of the lead you have, so coming off the bike I got no information on what was going on behind me.

I knew I would need to set a good pace on the run and needed to have a solid run all the way through. So I went for it. A little over a mile into the run I finally got word that the group was about 5 minutes behind. I admit that I thought I was going to have a little more and would have like more as Craig has been know to run some crazy fast half Ironmans. I told myself that there is nothing I can do about the run the guys behind may have, but I was in control of what I could do. So that is all I focused on. My coach, Matt Dixon, told me to just go out and have the best run you can and that is what I set out to do. The first time I got to see my competitors was about mile 5 of the run and I figured I still had about 3:45 - 4 minutes. I knew I was doing well and needed to run the same the rest of the way. The next time I was going to see them was not going to be until maybe mile 10.5 or 11. Again, being in the front I have no idea what is happening, and I need to just focus on my run. My competitors get time checks every couple minutes from people on the side of the run course giving them either more confidence as they are getting closer to me or less confident as they may not being put time into me. I need to run my best to try and discourage them as much as possible.

Mile 11 came and it seemed like I was maybe 1:30 or 2 minutes up. That was good, but Craig is one of the best runners and I know he has the ability to do amazing things. a little over 2 miles to go and I still need to keep my head down and dig with everything I had. My legs were getting heavy and stride shorter, calfs tightening up and energy level dropping. the last couple aid stations all I wanted was coke in hopes that it would give me some sugar and caffeine to keep me going. 1 mile to go and no one could se Craig behind through the winding wooded greenbelt. 3/4 mile left and still no sight of him. 1/2 mile to go and final turn down a straightaway home and suddenly there he is and everyone is telling me to go. I never looked back and ran as hard as I could, which was not that fast or pretty as I could not feel my legs any more and the lactate acid started building quickly. Legs got heaver and heavier as I got closer to the finish. I could see it just 50 meters in front of me. I was giving everything and in pain wanting my legs to give me more , but they could not. I had 20 meters to go and in the finish shoot, and then I see him come up on my shoulder. I tried to give it that next gear, but had nothing and almost fell over. I kept trying and just couldn’t match Craig’s speed. Watching him cross the line first just in front of me and with nothing left I collapsed from exhaustion physically, mentally, and emotionally.

So many things swirling in my head laying there on the finish line. Something that I think only happens when you miss the win by 2 seconds in a 4 hour race. Replaying the whole race in my head in just seconds. Trying to scan for those 2 seconds that I may have left out there. Non to be found and non to be expected to find as I played the best hand I had that day on my own, and he had happened to have that slightly better hand.

So in the last 2 weeks I have been testing myself against the best in the World and coming up short, but learning so much. I will have another chance when it really counts this October in Kona at the Ironman World Championship. This time I will be even more prepared and ready for the challenge.

Thank you for all your support and belief in me. Every race I am closer and becoming such a better athlete, and I owe a lot of that to you.

Chris
Posted by Recovox at 1:41 PM