Manayunk Madness is back! 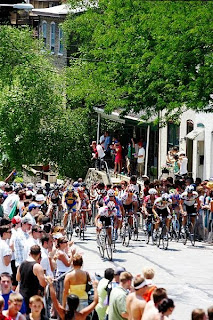 The 25th annual Philadelphia International Cycling Championship and the 14th annual Liberty Classic are thriving and ready to go after a near fall into the world-wide economic crisis. On Sunday, June 7th, many of the world's most renowned cyclist will line up to celebrate the silver anniversary of an event haled as the most important one-day race in America.

Crowds from all over the nation will gather along the well-known streets of the championship course to catch a glimpse of the professional cyclists in action.

Beginning on the Benjamin Franklin Parkway, the professional men will begin with three parade laps around Logan's Circle before shooting off onto a 23-kilometre circuit that heads North on Kelly Drive toward the famed Manayunk district. Both fields on course at the same time, crossing each other in opposite directions along Kelly Drive as the races progress. Fans perch by the masses atop Manayunk Street, a steep 800-metre hill known primarily as "The Wall".

The party starts well before the race does and ends long after the race is over with community festivities, barbecue, a beer-in-hand and the cyclists entertain their audience with their struggle over the climb. Ten times for the men and four times for the women.

The peloton descends off of Manayunk Street and back onto Kelly Drive to make their way back over climbs Strawberry Mansion and Lemon Hill before rounding back onto the Benjamin Franklin Parkway.

The women will complete four circuits totaling 91 kilometres. After the men complete the tenth large circuit their race of attrition kicks in with three short five-kilometre laps around Lemon Hill and Logan's Circle before the finish, totaling 250 kilometres.
Posted by Recovox at 9:40 AM