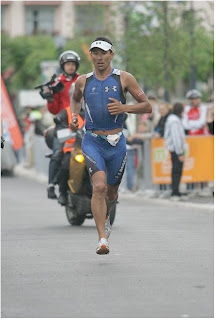 In an event with over 1,500 athletes from all over Europe and from every continent in the World, McCormack dominated yet again, smashing the course record on June 7th at the Half-Iron distance, ‘Triathlon Challenge France’.

Christened "the Challenge with a natural charm" because of the beautiful scenery in the Vosges du Nord Regional Park, held in the Alsace Region of France in the small village of Niederbronn Les Bain. Athletes awoke to a rather dark, cold and wet morning. However, with an 11am start time it gave the skies time to open up and truly dump on the athletes, fans and over 400 volunteers.

Live on French TV, the race was laid out with two transition areas with the finish line right in front of the Grand Casino in Niederbronn. The swim start however was located in a small and rather tight lake in the town of Barenthal set about 10 miles outside of town.

As always, Aussie Chris McCormack was the race favorite. However, this year’s field was incredible, having four different Olympians including French star Olivier Marceau, who --like McCormack-- is a former ITU World Champion. Marceau is one of only three athletes to have competed at all 3 Olympic Triathlon events and has now shifted his focus to longer distance racing.

The field also included South African Raynard Tissink, 7th place at Ironman Hawaii and a 5-time Ironman Champion, as well as Axel Zeebroek, Belgian Olympic star who led the bike in the ’08 Beijing Olympics. Like Marceau, Zeebroek has shifted his focus to the Half Ironman races and had come to France because of the big prize purse on offer. Also, starting were French long distance stars Patrick Bringer and former ITU Long course World championship medalist, Xavier Le Floch.

Fellow Aussie, and stellar swimmer Michael Murphy lead the entire swim with McCormack ‘tagging’ his feet the first 1km, opening a little lead on the group behind. Murphy soon cleared out half way through the swim and left McCormack isolated. “The group caught me towards the end of the swim,” stated McCormack after the race, “but I was in a great position and happy to be 2nd out of the water as I was a little apprehensive about the swim because of all the ITU guys racing.”

The weather turned from bad to worse during the swim and the rain really started to fall. What was a difficult and technical bike course to begin with quickly became a treacherous ride on narrow and wet roads through the various small villages.

The first section of the bike was incredibly fast with McCormack in the lead the entire way. “I decided to just really lay it out hard early before the technical parts”, said McCormack. Olivier Marceau followed McCormack in the early going, as well as Raynard Tissink. With McCormack setting the pace, the group of three cleared out fast from the main chase pack and by fifteen miles into the bike they had over a minute on the chase pack.

“I felt incredible on the bike but was rather reserved in the small towns”, McCormack said. “I didn’t want to crash so I just took my time in the technical bits to stay upright. I had a couple of close calls actually, but once on the open road I felt super strong and really pushed the pace”.

At 30 miles into the bike, McCormack had dropped the 3-time Olympian Marceau and only Tissink was staying close. The Aussie now had just over 4 minutes on the main pack and 40 seconds to Marceau. However, over the closing twenty miles, the course turned into one hill after another and Marceau pulled himself back up to McCormack and Tissink.

What looked to be the podium, McCormack, Tissink and Marceau all came off the bike together with McCormack still leading the charge. As always, McCormack had a blistering fast transition and put an immediate gap on the two chasers.

“I ran really hard for the first 10k”, stated McCormack. “I wanted to make them have to chase me, to make them go harder than they would want to.”

Much like the bike, the two-lap run course was incredibly hilly but McCormack continued to increase his lead with a powerful run, dropping Tissink early and putting over a minute into Marceau in the first few miles.

Despite the weather, the crowd was still enormous and though cheering for McCormack as well, it was clear they were willing their home town boy Marceau on for the win.

“I felt magic on the run and pushed even harder on the 2nd lap”, McCormack said. “At about mile 8 on the run there was a massive hill about half a mile long and [get ready for a Macca’ism] I just absolutely monstered it. I knew by the top I would have opened up some big time. Over the top of the climb, the marshals gave me a split at 2 minutes and I knew I was home free.”

McCormack continued to increase his lead and in the end, went on to win the race by over 3 minutes and smashed the course record by 4 minutes!

"I’m really happy with my race today. My run has really started to get back to where it needs to be and I have been able to hold my bike strength as well. I would have been happy to race anyone in the world today as I had one of those days where I truly think I was unbeatable. My form is great but I need to do some small tweaks for Ironman Germany in 4 weeks time."

McCormack’s 2009 season thus far has been incredible with five wins already and two seconds. “I have been chasing the competition around the world and after winning at Ironman Austria 70.3 two weeks ago with a great run, it was awesome today to post the fastest run with so many super fast short course boys in the field. My planning has been great this year and I really need to thank the people who I work with and the input they gave early season. The changes we made to my bike position and working with my sponsors to develop better gear for me has been awesome. The results this year show it."

McCormack will defend his Ironman European Championship on July 5th at Ironman Frankfurt.