Tension between Hinault and Armstrong 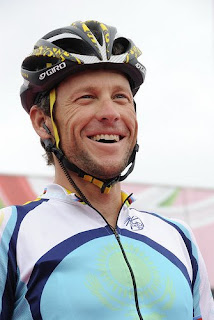 The two have met many times on the victory podiums at the Tour de France, but if Lance Armstrong takes a stage or the yellow jersey this year, many will be watching for sparks between him and Bernhard Hinault. The latter was characteristically outspoken when giving an interview to Le Parisien last week, not pulling any punches when it came to the Texan.

"I hope he will not be there," he said, referring to this year's Tour. "Is he afraid of France? Nobody forces him to come, he only has to stay at home! He cannot win the Tour. I hope that Contador gives him a beating."

Armstrong was unimpressed and let fire on his Twitter feed. "What a wanker. Five TdF wins doesn't buy you any common sense," he stated, referring to the comments and further fanning the flames.

Hinault doled out some other strong words during the interview, commenting on a variety of subjects. He was scathing about French riders, saying that, "there are champions who become civil servants when they turn pro. It is necessary to put a knife to their throats to get results. The French earn too much money and don't make enough effort.

"The French don't go training. Nobody slaps them in the mouth to move them forward. A portion of their salaries need to be blocked and given back if they have a victory."

He doesn't believe it's a case that his countrymen are cleaner. "The French have taken as much as the others," he said. "What is unusual is that cyclists are not treated the same way as other sports."

In a bid to improve French performances at the World Championships, it was announced last month that Laurent Jalabert would succeed Frederic Moncassin as national selector. Jalabert was one of the most successful French riders of all time but Hinault appears to give the thumbs down to his appointment.

"Without qualification, it is not normal he will be the technical director of the French team," he said. "How can you lead the riders when you only do it three days a year?"

He gave short quotes spoke on other subjects, including: The Tour de France: "The Tour is not too hard. It's necessary to stop complaining. Cycling is a difficult job, but it's better than going to the factory. A rider who wins is never paid too much. If you want to win, you try until your last breath."

Of 2009 race, he said, "We will see beautiful stages, magnificent landscapes, and people who will have fun on the side of the road. This will give us the wish to continue another year."

He also offered his opinions on the following topics:

Earpieces: "I am against [them]. It is only a Game Boy with a gigolo at the end who tells the rider when he must go and piss. With [Cyrille] Guimard, we studied the map and the winds on the morning of the stage.

Pollution: "Riders do anything. There is a pack of pigs in the bunch. One day it will be necessary to fine them."

Greg LeMond: "A very good rider, but not an attacker. [He was] unable to make a tactical decision alone. In 1986, I kept my promise in helping him to win the Tour. I had only one desire; to have fun.

Friends in cycling: "Eddy Merckx is the one with whom I spend the most time," he said. "The riders of today see me as an old fart. Except that I do not hide the truth."
Posted by Recovox at 8:43 PM