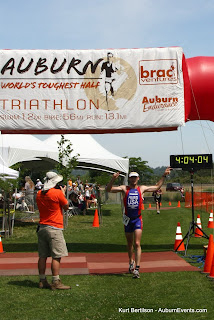 The 7th annual Auburn Triathlon enjoyed a record field of 750 athletes contesting four different race distances - the legendary World's Toughest Half, the National Long Course Duathlon Championships, as well as Olympic and Sprint distance events. The duathlon started with a 3k run, staggered to anticipate a finish even with the 1.2-mile swim leader. Duathletes and triathletes then converged to ride 56 miles and run 13.1 miles on what many agree are the most scenic and challenging courses in America. 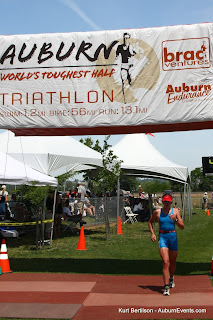 Spectacular performances were delivered and course records shattered. Justin Hurd of Ft. Collins, CO was crowned national long course duathlon champion after an exciting battle with Joe Thorne of Austin, TX. Hurd's 4:19 was a new course record. Mari Chandler was the female national champion, with an impressive 4:58 for 8th overall. Staffan Westerberg was the World's Toughest Half winner in 4:42, breaking Steve Larsen's 2008 record. Kat Baker of Australia shattered the women's course record with a remarkable 5:07, good for 9th overall. Former UC Davis athlete Kyle Leto showed his Olympic potential with a stunning 2:04 in the Olympic distance event, shattering the course record, while Melissa Vandewater survived an arduous trip from Australia to win the ladies title, breaking Gina Kehr's course record with a 2:20. 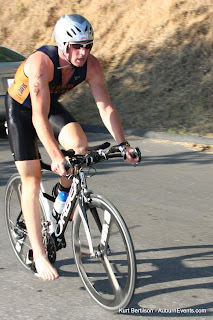 Event details and photos at auburntriathlon.com
Posted by Recovox at 4:59 PM