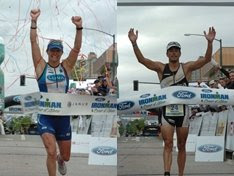 American Tyler Stewart and Spaniard Francisco Pontano took home their respective titles at Ironman Coeur d’Alene today, each winning by over nine minutes. To no one’s surprise, Stewart stormed to the lead in the women’s race during the bike leg and never looked back. Pontano also took the lead during the bike leg and then held off the charge of a few very quick runners behind him.

Stewart exited the swim six minutes back of Aussie Kate Major, who led the pro woman out of the water in 58:29. Also in the mix were Canadian Heather Wurtele and Italy’s Edith Niederfriniger; both just seconds back of Major. Onto the bike, it was all about Stewart, who quickly stormed to the front. Stewart finished the 112-mile course in 4:59:35—13 minutes faster than Wurtele, who posted the second-best split. Major rode just a few minutes back of the Canadian and entered T2 in third. As expected, Major made up a bit of time on the run but it wasn’t nearly enough. Stewart broke the tape in 9:23:21, with Major finishing second 10 minutes later. Wurtele lost a bit of time on the run, but still finished comfortably in third in 9:34:24.

In the men’s race, Hawaii’s John Flanagan led out of the water in 48:37, almost two minutes ahead of Pontano. Flanagan’s lead was short-lived, however, as Pontano and American TJ Tollakson quickly erased the gap on the bike. Tollakson rode well, but he couldn’t close the gap on Pontano, who entered T2 with a six-minute advantage. Kiwi Bryan Rhodes entered transition third, but was forced to drop out. Tollakson ran well, but he was unable to close the gap on Pontano, who crossed first in 8:32:12. Tollakson finished second in 8:42:03, with Germany’s Max Longree grabbing the final spot on the podium.