Ben Jacques-Maynes' perspective from the back of the Astana train 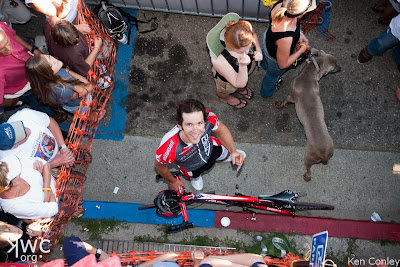 ROAD: You were behind both Levi and Lance, what's your perspective on how they look just prior to the Tour de France?

Ben Jacques-Maynes: They were looking really good. They are able to step their pace up at will. Whenever they needed to go hard they could. You could tell they were deciding they wanted to ride hard or really damn hard. They definitely weren't showing all their cards to me. They were there for a good hard workout, but they weren't riding at their maximum. It was a two-man time trial. There was a lot left in the tank from them and I was pretty impressed to see them ride that hard for that long. I think they're going to have a really good Tour. I think Lance was either trying a little harder or inherently had a little bit more than Levi. You can see by looking at some pictures that he was suffering a little bit more, but he was really putting it out. He was definitely motivated to work hard and get a lot out of the race.

I raced with Levi right before the Giro (at Sea Otter), and I was wondering if he was working a little too hard there. He was going good, obviously, but he might need to temper this a little bit. Now it looks like Levi was tempering himself a little bit. So it looks like Levi is planning on being good for the whole three weeks instead of suffering during the last week. The last week of the Tour is where it is going to be won especially on the Mont Ventoux. Those guys are smart and planning ahead and you can see that by the way they rode and I had the unique opportunity to watch it before his last Grand Tour. Levi, Lance and Chris flew back to Aspen that night and did another four hours the following day. I drove home and slept. That's the difference right there.
Posted by Recovox at 12:58 PM