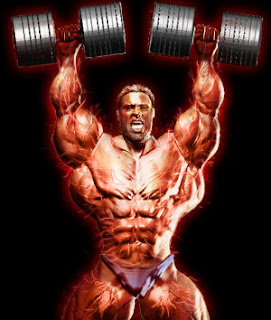 Over the years, more than a couple readers have asked about creatine and whether or not it has a place in the Primal Blueprint. People may be tempted to lump it in with anabolic steroids or other chemical enhancers, but they would be conferring guilt by association. To clarify, creatine is a naturally occurring substance involved in ATP energy production. All vertebrates have it, and most of us get a good chunk of our creatine from eating said vertebrates. Red meat in particular – beef, lamb, and bison – contains the highest levels of dietary creatine (interestingly enough, human vegetarians – unlike their ungulate counterparts – generally have far less creatine in their muscles than meat eaters). The rest of the creatine we get is biosynthesized internally from three amino acids (some of which are also derived from diet): arginine, glycine, and methionine.

Whether it’s biosynthesized, part of a natural meaty diet, or taken as a supplement, creatine helps provide a very specific type of energy for your muscles. ATP, or adenosine triphosphate, is the fuel we use for short, intense bursts of speed or strength. It also plays a critical role in cell maintenance by regulating the assembly and disassembly of the cytoskeleton, but that’s usually not why people take creatine. They do it because it assists in ATP production. When we’re putting up large amounts of weight or going for 1 rep maximums or lifting cars off of accident victims, we are engaging our ATP energy. Our ATP is usually only good for a few moments of maximum output: fifteen seconds of all out sprinting; a few squats at 80% of our 1 rep max; or one good 100% 1 rep max overhead press. This is the stuff Grok would have engaged when making the killing blow on the mastodon. It’s survival fuel, and it depletes rather quickly, but it replenishes just as fast.

Creatine can help give that extra little burst of ATP that might get you through the set. Rather than stop at 10 reps, you might be able to push through for 12. It’s not a game changer, but it has been demonstrated to show some real – albeit minor – benefits in immediate muscle energy. Whether it increases musculature and permanent strength is unclear. The added reps it can help you pump out might confer some benefits, like signaling your genes to synthesize more protein and grow more muscle, but it gets murky when you consider that creatine supplements are cell volumizers that cause water retention in the muscles. Although bodybuilders and other athletes looking for “puffy” bulk over performance might find some use in creatine supplementation, most Primal Blueprinters who value performance over illusory size are probably getting plenty of creatine through dietary means (meat, fish, fowl, etc). The increased muscle fluid absorption can even result in muscle cramps and in dehydration for the rest of the body, so I would actually advise against too much creatine for dedicated athletes.

I’ve tried creatine before, using a six week on/eight week off cycle (so as not to get acclimated to it), and I definitely experienced the slight increase in capacity. Still, at my age, I’m not going to get a whole lot stronger, and I’m not too worried about it at any rate. One thing I can say: creatine is one of the most heavily researched training supplements out there, and it’s probably quite safe in doses less than 5 grams per day. If you’re truly interested in the pro-ATP effects, give it a shot. It won’t hurt, but don’t expect any magical results. Just be sure to stay hydrated and look for a brand without added sugar.

I’d say it works in the context of the PB. It’s not a necessary component of it, like, say, fish oil supplements, but it certainly doesn’t conflict. I’d even urge our more vegetarian-minded Blueprinters to consider creatine supplementation (or beef supplements) if they’re experiencing strength deficiencies when moving heavier weights.

Visit MDA by clicking the title link
Posted by Recovox at 2:46 PM