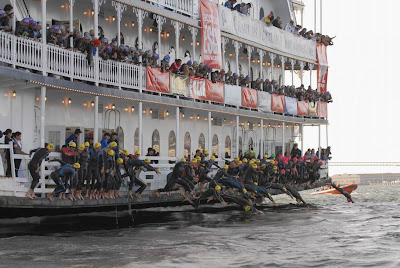 I thought I would share my past race strategy for the Escape from
Alcatraz. I am not saying my approach to this course is the best,
but unless you are Pro, it worked really well for me. It helped me
win the race 3x as overall amateur champion and I never got beat in
my AG. THAT said, I am a swimmer and this race is a swimmers race,
so bear this in mind.

SWIM: I have always swam as far away from the shore as possible.
Deep water carries less current and therefore the SF tides had less
impact when swimming straight towards the St. Francis Yacht club vs.
swimming in to shore and then UP along the shore, against the
current, to the St. Francis. Please know that the police boats and
kayakers will push you back 'in line' but know that the fastest water
is deep water (hence why competition pools are usually deeper).

RUN TO BIKE: If you feel you have the feet for it - run barefoot.
If not, take that extra 30 sec. and put some running shoes on that
are very loose since wet, sandy feet will be hard to get in and run
in... Run hard to the bike. Why? Because this is one of those
spots where others relax a bit too much, here is an easy spot to make
up 15-30 sec.

BIKE: Find your legs along Crissy Field. Spin an easier gear that
you would usually ride - you'll want that extra energy later! Once
you start going up the hill to the GGB and over into Sea Cliff and up
the the Vet's Hospital: be smart - I chose to go hard, but kept a
little something in the tank. Once in the Park, I was back to
spinning a gear easier than I usually would ride and wanted. THEN,
once back on the Great Highway and heading up to Cliff House: I
would hammer. Ride hard all the way back up to the Legion of Honor.
Why? Because most ride too hard in the park and early on, but since
I held back a bit on the flat sections, I made up way more time on
the hills (like on pro cycling: no time to be gained on the flat
stages, but a lot to be made on a climb!). Once up at the GGB again
it spin a huge gear home to the run

RUN: Similar to the bike. Find you legs on the flat part of Crissy
Field. I always held back here since I knew I wanted fitness and
strength coming home. I remained conservative up the initial stairs,
all the way to the beach...and then it was time to hammer again.
From the Baker Beach turnaround, up the sandladder and the left turn
up the hill next to the road, I went as hard as I could. Why?
Because you get to the top of that hill and it's ALL downhill from
there and home. Also, most went too hard early on and you make up a
ton of places/time on this last hard stretch up the sandladder and
hill. Leave nothing on the course as you book it down Crissy Field
to a glorious finish!

Thanks!
Chris Hauth
Posted by Recovox at 2:24 PM