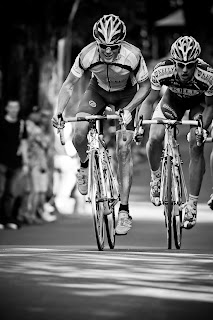 Chris Horner was riding extremely well at the Giro when a crash on stage 10 fractured the tibia in his left leg and forced him to retire. He is now back on the bike training in Aspen, Colorado with teammates Lance Armstrong and Levi Leipheimer. Road Bike Action talked with him about his recovery, current training program and what's going to happen at the Tour.

Road Bike Action: how hard is it to comeback mentality after you had such great form at the Giro?
Chris Horner: Mentally was, truthfully, kind of the easier thing to recover from because you knew the form was good. At least then I thought my selection for the Tour was good as long as the leg was good.

The hardest thing all year has been California, the form was really good, and I busted the knee. I finished California but it was getting worse and worse every day. I could barely walk. I went to Pais Vasco and my form was exceptional easily as good as the Giro, maybe even better. I crashed; broke the collarbone got thought that and went to the Giro. I was racing the Giro with the broken collarbone. It hadn't healed yet. It was some bad luck. Hopefully it is done and over.

At least I know that everything I am doing training-wise is working so I will just keep doing that. Hopefully my selection for the Tour is there based on the results I have already had. So everything is very optimistic.

RBA: How much time were you off the bike after the crash in the Giro?
CH: Two weeks off the bike. There were twelve days were I could actually feel pain walking if I put stress on it. Now the leg is good. I haven't had any pain at all since the twelfth day. No pain from the bike at all. I have had multiple five-hour rides and felt no pain at all. I would say it will definitely be healed before the Tour if it isn't already healed now.

RBA: How is your training going with Lance and Levi?
CH: We have the three amigos here training. For me it is the first time I have been training this high so it is a different thing for me. I am trying it out and hopefully it works. We are at 8000' and training up to 12,000', Independence Pass.

I have never done this kind of altitude before so I have now idea. If I could just stay where I was at the Giro I would be happy, but if it give me a little extra help, cool. There is going to be some good form at the Tour.

RBA: How are you feeling now?
CH: The weight is fantastic; the legs are very good. It just a matter of being around the corner. We are at altitude so you lose 100 watts. I have never trained at this altitude before so I don't know how you are supposed to feel. I know it sucks, but I am pretty sure it sucks for everybody. We have three really good riders between Lance, Levi and myself and nobody is going over 300 watts. And at sea level, 300 watts is an easy day in the saddle.

It's ugly. If you are doing 200 watts, that's a fantastic ride. If you are doing 225, you are asking yourself 'Do I really need to go this hard?' A couple of days ago I rode up and over Independence Pass to the junction at Twin Lakes and back. I was on the bike for 4hours 40 minutes and was averaging 209 watts.

RBA: Who are the favorites for the Tour?
CH: Menchov definitely looks good. I think we are going to have some great talent with Astana with Lance, Alberto and Levi possibly even Kloden, too. Cadel is going to be really good. He always is. It seems like he is even more motivated this year with how aggressively he was riding at the Dauphine. We will see if that helps him or hurts him. Those guys are my favorites right there. Outside of that it is going to be difficult to predict.

RBA: How do you think the Tour will play out?
CH: I hope it is exciting, for one. That is always good for the fans. I would like to see where Lance just rips it up somewhere alone the course. It would be a legendary race if Lance were to come back and just light it up.

It is going to be difficult to say at this point and time. I think people will be waiting. It will be a little calmer. There is so much left at the end there. The second to last day we are going to be going up Mont Ventoux so if you are better than everybody you can just win it on Ventoux. But, you better have some confidence to wait until almost the last day.

RBA: Is there a possibility that on Astana there are too many chiefs and not enough Indians?
CH: No. I don't think so. You have two guys on the team, Alberto and Lance, going in, as leaders of the team and those two guys will figure it out amongst themselves. Then you have seven strong guys to help them out.
The only scenario you would see where there is a problem if there are two strong leaders, Lance and Alberto, and they didn't have any strong help behind them. But there is so much strong help behind them that they can afford to wait it out to see who is better.

RBA: How does Levi figure into the mix?
CH: I would say, at this time, everybody except Lance and Alberto are going to assume a supporting role in case one of those two guys get into any kind of trouble. Eight guys aren't going to wait if Alberto flats early on or if he goes up a climb and gets dropped early on. That's not going to happen. But you can have three guys wait for him if he has a problem. We had that scenario at the Giro where I am staying with Levi and we are down to five guys so Levi always has a teammate with him.

RBA: How is Lance looking?
CH: If you look how good Lance started coming towards the end of the Giro, by the end of the Giro he was looking good. That's not the Lance everybody is used to seeing, but 12th overall at the Giro after three years away is pretty solid. And he was able to follow some big moves near the finish in the last week by big riders. That's a big improvement.

He needs 1% more form to stay with the best in the world and 2% will put him with Alberto. I see Alberto as 1% better than everybody out there and Lance just needs 2% better than he had at the Giro and he's going to be fighting for the win at the Tour de France. 2% is small. He needs to lose a kilo or two of weight and that's 1%, a little more extra training and a little more rest and that's 1%.

RBA: Do you need to kick him out of the car when you are headed over to the McDonald's in Aspen?
CH: I don't eat McDonald's anymore. I gave that up. It's not a permanent thing, but at the moment I haven't eaten fast food burgers since Tour of California. I still have my occasional donut, though.
Posted by Recovox at 9:55 AM