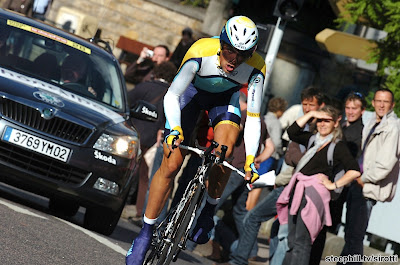 Evans covered the technical, 12km course in Nancy in 15 minutes, 36.64 seconds, posting the best time on a steep climb at 3km and then holding off Contador by eight seconds to win the stage and claim the first leader’s jersey of the eight-day Dauphiné.

It’s the second victory on the year for Evans, who’s finished second two years in a row at the Dauphiné before finishing second at the Tour de France.

Contador, riding a new Trek time trial bike, was three seconds slower than Evans at the 3km hilltop time check and then ceded more time to the motivated Australian to slot into second at eight seconds slower in his first race since winning the Vuelta al País Vasco in mid-April.

Defending champion Alejandro Valverde (Caisse d’Epargne) rode well to stop the clock at 15:59 to claim third at 23 seconds off the winning pace.

Sebastian Rosseler (Quick Step) set an early fast time of 16:09 that withstood challenges from such riders as David Millar (Garmin-Slipstream), who slotted into 10th.

Three riders – Vicenzo Nibali, Frantisek Rabon and Cristian Knees –all stopped the clock one second slower than the Belgian, who hung on to fourth on the stage.
Posted by Recovox at 11:50 AM