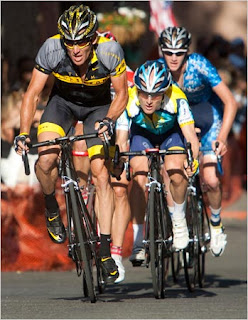 After Lance Armstrong won the Nevada City Classic cycling race recently and rushed off without the trophy, race officials figured he would never have second thoughts about leaving it behind.

“The guy’s won the Tour de France seven times, so we were thinking, why would he ever want the trophy from our little race?” said Duane Strawser, who directs the 49-year-old event held in California. “But wouldn’t you know it, the phone rang.”

An Armstrong representative called and asked that the trophy be sent to his home in Texas. That was when the significance of it dawned on Strawser. “Of course, he would want the trophy,” Strawser said last week. “It’s evidence of his success since his comeback.”

In September, Armstrong emerged from three and a half years of retirement, announcing that he would try to win his eighth Tour de France, a race that begins Saturday in Monaco. Aside from the winner’s trophy for the Nevada City Classic — his first win since the 2005 Tour — little has gone as expected for Armstrong in the reprise of his career.

He broke his right collarbone in March, causing a major hiccup in his training. His team, Astana, has had financial problems and nearly lost its racing license. A protest he led at the Giro d’Italia over course conditions was met with harsh comments from fans and the race’s director, prompting Armstrong to stop talking to reporters for the final two weeks of the event.

The personalized antidoping program he said would be led by the prominent scientist Don Catlin — which was to be the most extensive in sports history — fizzled out before it started. And an incident with French drug testers who knocked on his door threatened his eligibility for the Tour de France, his signature event.

Although many Armstrong-watchers consider the philanthropic element of his comeback to be a success — a main thrust of his return was to raise awareness and funding for the battle against cancer — his competitive success is likely to be defined by his performance over the next three weeks.

“I wouldn’t say that I’m not going for the victory,” Armstrong said in a phone interview on Sunday from France, where he was scouting several of the Tour’s Alpine stages. “I will say, full disclaimer, that it’s not been as easy as I thought. I think it’s also fair to say that I’m not as confident in winning as I was in other years.”

The biggest obstacle before Armstrong, 37, may be his teammate and the race favorite, the 26-year-old Alberto Contador.

“The trick is trying to be a responsible teammate and co-leader and understand that Alberto could not just be stronger, but could be a lot stronger,” Armstrong said of Contador, who won the 2007 Tour as well as last year’s Giro d’Italia and the Vuelta a España.

Armstrong provided a few reasons, just in case Contador’s superiority turns out to be true. He said that his body had needed time to get back in the swing of serious cycling, and that his age and a midseason crash had slowed him.

Lately, though, his training performances have shown him to be as fit as he used to be, Armstrong said. Still, he is heading into this Tour with a different state of mind.

“I don’t feel the same sense of fear that I’ve felt before,” he said, referring to a fear of failure that fueled his drive to win. “Maybe that’s not ideal for me, but I’m comfortable with my record from before. I think I’ve proven my natural talents in 2009.”

To start the year, Armstrong raced in Australia’s Tour Down Under and finished 29th. Then he was seventh at the Tour of California, riding in support of his teammate Levi Leipheimer, who went on to win.

About five weeks after breaking his right collarbone, Armstrong competed in the Giro d’Italia, a grueling three-week race that began in Venice and ended in Rome. After starting slowly, he improved day by day to finish 12th.

Phil Liggett, the longtime cycling race announcer, said in a teleconference Monday that Armstrong proved by the end of the Giro that he was “probably one of the best riders in the race.”

Liggett added, “I think the riders are scared of Lance right now.”

David Millar, a friend of Armstrong’s who rides for the Garmin-Slipstream team, said Armstrong could intimidate his competition, no matter his age or fitness level.

“Come on, the guy has won the Tour seven times; he is almost programmed to win the Tour by now,” Millar said at the Giro. “If he doesn’t win, you could imagine it would be quite crushing for someone as competitive and self-assured as he is. But with his comeback, that’s the risk he has taken.”


Armstrong said falling short at this Tour would not be the biggest failure of his life. That, he said, would be his failed marriage to Kristin Armstrong, his former wife.

A loss at the Tour would not mean his season was for naught, he said, because his comeback has brought more attention to the Lance Armstrong Foundation. Donations to the cancer foundation over the past two quarters are up nearly 5 percent, according to figures provided by the organization. In 2008, before Armstrong’s return, $7,675,000 in donations came in during those quarters. In 2009, with Armstrong back, $8,056,000 came in.

Nike is also about to release another wave of LiveStrong clothing and gear, and company officials said 100 percent of the profits from that line would be donated to the foundation. Derek Kent, a Nike spokesman, declined to provide details about the money raised from the partnership, but he said Armstrong’s return clearly “does help” with sales of the line.

Armstrong’s return has also brought more people to his foundation’s Web site. The traffic at livestrong.org surges in countries where Armstrong races, or just visits for an event, as it did in Mexico.

So why, then, would it matter to the cancer fight if Armstrong is on the bike or off it?

“With Lance being so visible on TV and in the media during a cycling race, from our standpoint, it’s critical for our work,” said Doug Ulman, the foundation’s president.

It had been 18 years since Armstrong entered — and finished second — in his first Nevada City Classic, in 1991.

In that time, he became a national champion, competed in an Olympics, received a cancer diagnosis and survived it. He married, had three children, then divorced. He won two more Tour de France titles than any other cyclist. He garnered legions of fans, and he picked up critics, too.

He has emerged from retirement to show that he can stay with much younger cyclists. And last month, he had his fourth child, Max, with his girlfriend Anna Hansen.

Yet even with his first Tour in four years just ahead, he is still curious to see and hold the Nevada City trophy. “It shows that I have been around for a long time,” he said.
Posted by Recovox at 10:58 PM