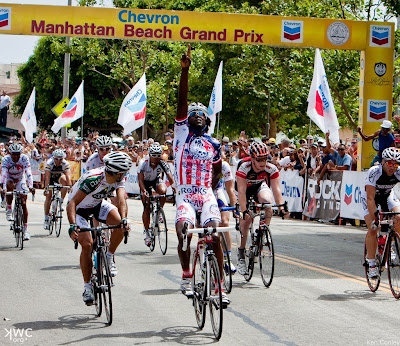 In the women's race, 16-year old Proman Hit Squad rider Coryn Rivera took the win after riding a smart race and outkicking the competition out of the final turn. 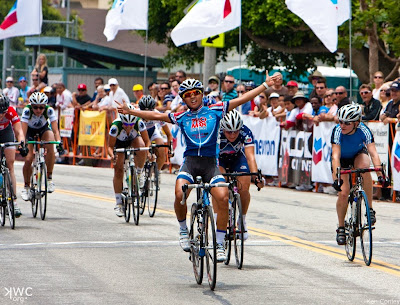 With $15,000 and NRC points on the line, the call-up for the 48th annual edition of the race featured notable domestic pro names. OUCH-Maxxis brought Rory Sutherland and Floyd Landis. BMC's Tony Cruz rode over to the race from his nearby home while Team Type 1 lined up six-year Euro pro Matt Wilson. Rock Racing wheeled out the serious artillery in defense of Bahati’s title, including newly-hired Ivan Dominguez and Freddie Rodriguez.

The 80-minute race on an out-and back course with one gentle 50-foot riser started with a flurry of attacks doomed by a steady headwind and the field’s willingness to chase. Twenty-one minutes into the race Kahala LaGrange rider Adam Livingston worked up a 17-second gap on the field, but was caught after a long lap off the front.

Attacks followed by Rock Racing’s Chris Baldwin, Kelly Benefits’ Neil Shirley, Kahala LaGrange’s Brandon Gritters and Cruz, but the field was having none of it and all the breaks were quickly reeled in. Forty minutes into the race a promising break nipped off the front including dangerous motors like Landis and Rodriguez, but the group was anything but cohesive and was once again swallowed by the 100-plus rider field.

At the five to go bell, Thomas Nelson (Liquid Fitness-Adageo Energy) and Steve Reany (California Giant Berry Farms) had one last go but the two-man effort was again shut down by a storming field. A crash with three to go didn’t stop Rock Racing from getting five riders massed at the front with two laps to go. The Rock train kept the field pegged into a single-file thread for the remaining laps. Yet on Manhattan Beach’s notoriously sketchy back stretch Team Type 1’s Ken Hanson managed to surf up the Rock train on the wheel of teammate Aldo Ilesic. Hanson took the lead position going into the final sweeping U-turn before the 300-meter sprint to the finish, but faded to third after Bahati and wily Argentinian speedster Lucas Sebastian Haedo.

Bahati is having a run on seaside Southern California victories. He also won the Dana Point Grand Prix NRC crit in April and the San Pedro Grand Prix last weekend. The Los Angeles-based rider has spent a tumultuous year at Rock Racing, where he started as a pro, then raced as an amateur, and again went back to the squad’s pro roster a week before Manhattan Beach.

“I followed Ivan Dominguez the last three or four laps. He just kept saying 'whatever happens don’t lose my wheel.' That’s all I did,” Bahati said. He added that Team Type 1 disrupted the team’s lead-out plan on the dangerous downhill pitch to the final turn. “I did have to take off of (Dominguez’) wheel coming into the last turn because Team Type 1 had a great jump on us. So I just slid right in third spot and came out of the corner third and made it from there.” Bahati had nothing but praise for Team Type 1: “It was a great jump by those guys. That’s the way you’ve got to do it. But unfortunately for them I had better legs at the end.”

Team Type 1’s Santa Barbara-based Hanson gave teammate Aldo Ilesic credit for escorting him to the front on the stormy last lap. “I came through the last corner first. It was a little earlier than we wanted to, but it was either that or try and not go for the win at all. I ran out of gas with 75 meters to go. But it’s a prestigious race. It’s always good to get on the podium for third.”

Speaking in Spanish, Argentinian Lucas Haedo explained that the last lap wasn’t ideal because his lead out man Alejandro Borrajo went down in a crash late in the race. “I fell behind on the last lap, but on the final stretch I was able to move up and get onto Bahati’s wheel in the final turn. The sprint was really fast and I couldn’t pass. But a second place isn’t bad!”

Rock Racing’s Ivan Dominguez, who spent the early part of the 2009 season racing for Fuji-Servetto ProTour team and who placed second to Bahati in Manhattan Beach in 2007, said that Rock Racing intended to do all they could to defend Bahati’s title. “From the beginning that was the plan, to take Bahati to the finish. It went well.”