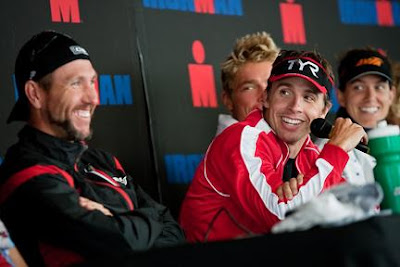 COEUR d'ALENE -- When Maximilian Longree reaches the finish line of Sunday's Ford Ironman Coeur d'Alene, he wouldn't mind if a cheeseburger was waiting for him.

That's what he was handed when he won the Ford Ironman Louisville last year, but he got just two bites of the monster double-bacon cheeseburger.

"The other half I never saw again," said the German-born Longree. "Maybe I'll see it on Sunday."

Light-hearted humor and laughter marked Friday's press conference at the City Park bandshell with some of the athletes expected to vie for titles in the men's and women's fields.

When reminded the lake's temperature was much warmer than last year, Stewart shook her head.


And then there was American TJ Tollakson cracking a joke about five-time Ironman winner Bryan Rhodes' beard.

"I think Rhodesy really knows what he's doing here. He's the only one in the Inland Northwest who's here with a lumberjack beard competing in the race," he quipped.

Later, when Tollakson talked about the "screaming fast downhills" on the bike course, he added, "We'll reach speeds of 50 miles an hour. As long as the drag from Rhodesy's beard isn't too much, he should approach 50 miles an hour, too."

But Sunday morning, forget the friendly banter. They'll be pushing each other to the limits in the battle for more than $50,000 in prize money.

The men's field will be led by New Zealand's Rhodes, along with Longree and Tollakson. The women's field will include defending champion Canadian Heather Wurtele and Australia's Kate Major.

Wurtele said she's not feeling any pressure to win. Like she did last year, she hopes to grabs the lead early and holds on.

"I'm just out there doing my best. I like it of course when I get out of the water first and I'm ahead and can get splits that I'm pulling away from people," she said. "If that doesn't happen on Sunday, I'm still just going to race my best and hopefully that will end up leading to a win."

Kate Major, who has two Ironman titles to her credit, placed third in Coeur d'Alene in 2006.

She suffered some injuries, but took some time off to recover and has been training well. She believes she'll be among the leaders Sunday.

Stewart said she'll give up time in the swim, but hopes to gain it back on the bike and run.

"The bike course is set up for someone that rides the way I do," she said. "Cycling is my comfort zone."

Stewart added her running has improved, too.

"My swimming still sucks," she joked.

Like Wurtele, she plans to do what she can and not worry too much about the others.

"I have a pretty good internal clock. I just race my race and it puts me up where it puts me up," Stewart said. "First place would be nice, but you've got some killer competition here."

On the men's side, Tollakson is hoping for a breakthrough. He placed in 2007 at Ford Ironman Louisville and second at the Ford Ironman Arizona 2008.

He also has fought through illness and injuries and spent the winter training in Tucson, Ariz., where the hills prepared him for this course.

"It's one of the most challenging bike courses out there, about 6,000 feet of climbing over 112 miles," Tollakson said.

There are long, sustained climbs and short, steep hills that create a rolling course.

"I'm looking forward to taking advantage of that," he said.

Rhodes, who won at the 2008 Subaru Ironman Canada race and placed second at the 2009 Ironman Malaysia, said he's gone over the course three times.

"I've got one up on my competitors, so they'll be following me all day," he said with a smile.

Rhodes, a strong swimmer, said the expected rough water "sorts it out a little bit better" than giving "a free tow" to his pursuers.

"I don't anticipate on doing all the work," he chuckled.

Longree said he'll probably be back chasing the leaders after the swim and the bike.

"I have to give my best on the run and try to catch the guys," he said with a big grin. "I'm just going to say to my competitors here, don't forget me. Maybe you will see me. And hopefully you will see me with my second half of the burger, and if you are fast enough, you'll get a piece of it."
Posted by Recovox at 5:14 PM