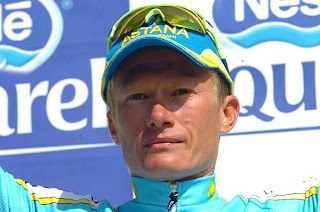 The Court of Arbitration for Sport confirmed on Tuesday that disgraced Kazakh rider Alexandre Vinokourov must complete a two year ban for doping, meaning that he cannot return to racing until July 24th.

The 35-year-old tested positive for homologous blood doping in the 2007 Tour de France but was given only a one-year ban by his national federation. The UCI initially did not contest this as the former Astana rider had announced his retirement; however, when it became clear that he was attempting a comeback, the UCI took the case to CAS.

Last October he announced that he planned to return with the Astana team and would target the spring Classics plus the Giro d’Italia, then focus on the 2010 Tour de France.

While Vinokourov currently doesn't have a team and would have found it difficult to gain admission to this year’s Tour due to his positive test, Tuesday’s ruling means that he will now be unable to compete before July 24th.

He reportedly intends to target the Vuelta a España, which he won in 2006, plus the world road race championships.

Destination unknown
It is uncertain as to which team Vinokourov will compete with after his return. Astana was originally set up in mid-2006 when the Operación Puerto scandal ensured that he was left without a backer prior to the Tour de France. The-then Kazakh Prime Minister Daniel Akhmetov swiftly negotiated a deal whereby several large Kazakh companies would back a new-look squad, which would be titled simply Astana, the name of the country's capital city.

While the 2009 version of Astana already has several leaders and Vinokourov’s return would bring a controversial focus to the team, general manager Johan Bruyneel was quoted last December as saying that it was ‘logical’ he would return to the team which was created for him.

However things have become less certain due to the financial problems which have dogged the setup this year.

A number of Kazakh sponsors have defaulted on their payments and while a portion of what was due has been paid, today [Tuesday] is the deadline for six million euro to be lodged in order to guarantee the team’s future.

Should there continue to be a strong Kazakh sponsorship, Vinokourov seems likely to return after July 24th. But if the team stops or finds alternative sponsorship, his future racing colours appear less certain.
Posted by Recovox at 11:20 AM