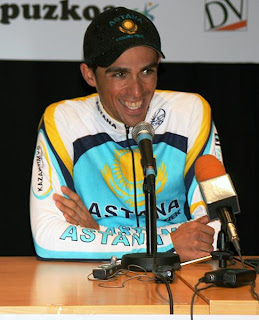 Two months after his last victory at the Vuelta al País Vasco, Alberto Contador (Astana) is returning to competition at the Dauphiné Libéré, where he hope to polish off his form for his top priority of the season, the upcoming Tour de France, which will begin on July 4.

Contador says he is already in good shape. "I'm arriving with plenty of work done and a good base. I've done five-hour training rides and long climbs – like we'll find here."

He admitted that he has to lose one more kilogramme before the Tour, but thinks that will happen as a matter of course during the Dauphiné Libéré.

Contador is no newcomer to the Dauphiné. "I've done it in 2005, when I cut my finger in my spokes, and in 2007. This race is always hard, but the course this year is incredible. It has just two kilometres less of time trialing than the Tour de France and spectacular mountains like Mont Ventoux. It has a short demanding stage with the Izoard and another stage with the Galibier, Croix de Fer and Madeleine. It's tremendous.

"The course is good for me," he said. "I've been doing these types of climbs to prepare, so I think I'll be able to go up them without too much punishment for my body."

The Spaniard has modest aspirations for the race. "I want to be calm in race, without thinking about the overall. Maybe I will do some testing of my legs, but I want to stay strong so I'm not missing them in July." He named his favourites as Alejandro Valverde, fresh off the Volta a Catalunya, Cadel Evans, Robert Gesink, Ivan Basso and Igor Antón.

Contador will be trying out a new bike in the Dauphiné's prologue, one he may use in the Tour de France. He has not yet decided whether he will race the Spanish championships.

"I want to concentrate 100 percent on my preparation for the Tour. My aim is to be in perfect condition on July 4 at the start in Monaco."
Posted by Recovox at 12:08 PM