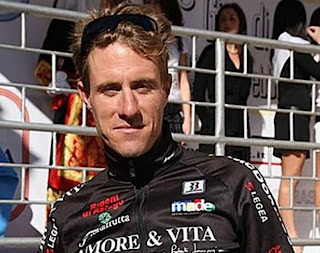 For American road racer Chad Gerlach, it really is about the bike, as the former teammate of Lance Armstrong faces his former rival in Sunday's Nevada City Classic.

The 35-year-old Gerlach, a recovering homeless crack addict, races for the Italian-based team Amore e Vita/McDonald's. He's celebrating the one-year anniversary of recovering from addiction and getting his life back together after five years of abuse and living on the streets of Sacramento.

"I can't believe Lance is going to be here," he told The Sacramento Bee after two hours of easy riding Wednesday. "If I could do anything in that race, it will be to make sure I beat him."

"I'm going to ride hard, but I've already surpassed my expectations and surprised myself," he said. "I'm living a dream. Sure, I'd love to win. But the results don't really matter."

Armstrong, 37, along with Astana teammates Levi Leipheimer and Chris Horner, has entered the 49th annual Nevada City Classic as final preparation for his attempt to win an eighth Tour de France.

Gerlach has had a remarkable season, even if his domestic racing exploits have been overshadowed by Armstrong and the return of Floyd Landis, who he lines up against frequently. Gerlach recently won the King of Mountains prize at the Nature Valley Grand Prix in Minnesota, finishing second on Stage 5 after a long solo breakaway.

Last year, while Armstrong was still a marathon runner with a penchant for blondes, Gerlach appeared on Intervention, a popular A&E reality show. He was a shell of his former self, a racing machine who tussled with nearly everyone he met, including Armstrong. Gerlach's racing career ended in 2002, just as Armstrong was ascending the throne to greatness. Many, including his family, have said Gerlach's high level of intelligence and Attention Deficit Disorder (ADD) contributed to his downfall.

Gerlach is racing in Northstar at Tahoe's Tour de Nez leading up to the race in Nevada City, while Armstrong continues to train near his home in Aspen, Colorado. The autograph seekers and media will be looking for Armstrong in Nevada this Sunday, but maybe the Texan will bury the hatchet with the quiet Californian, and allow some light to shine on one who needs it most.
Posted by Recovox at 10:48 AM