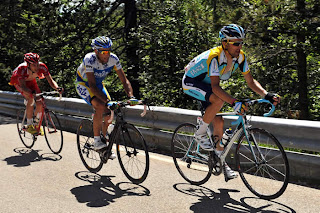 Putting in a decisive attack with 10km to go, Spanish national road champion Alejandro Valverde launched himself past the race leader Cadel Evans (Caisse d’Epargne) and straight into a yellow jersey of his own, grabbing the lead by a slim 16-seconds in front of the Aussie with three stages to go. The stage was won by Poland's Sylvester Szmyd (Liquigas) with Valverde coming in just behind. Team Astana’s Alberto Contador slipped to third place at 1:04 back after placing 8th on the stage. However teammate Haimar Zubeldia had placed himself up close to the breakaway leaders and took third place on the stage, a strong performance by the 32-year old Basque rider in his first season away from the national team of his region, Euskaltel-Euskadi. His good finish pulled him up from 21st to 5th on general classification.

Regarding team tactics Contador said, “It was planned to not go for a stage win or the GC. From the beginning of the climb it was my plan to save forces. My goal is the Tour de France and I don’t want to punish myself. The Ventoux was like always, very windy in the final kilometers. The wind played a crucial role. The riders chasing the leading group had to attack. When they did they were alone and paid for their effort (in the wind). The riders in the leading group stayed together and could keep a constant rhythm. The fact that Haimar was in the front was good for me. I had a good excuse to not go for the victory. Believe me, this climb took away all my doubts. Evans was good again but he was alone. No teammates.” Alberto had Zubeldia in front of him and Jesus Hernandez just behind, giving Astana Cycling Team the win in the Teams classification on the stage and the lead in the GC as well.
Posted by Recovox at 12:13 PM