Astana's leadership clear ahead of Tour 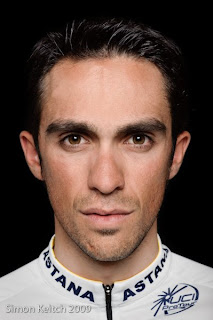 As attention swings to next month's Tour de France following the conclusion of the Giro d'Italia, the apparent questions over who will be Astana's captain seem to be answered.

There's been constant speculation since the return of Lance Armstrong surrounding who will be the team's number one in France during July. While it hasn't caused tension within the team, Astana manager Johan Bruyneel has had to address regular questioning about the matter. It appears that the outcome of the Giro d'Italia has helped shape his latest response.

Bruyneel told French sports daily L'Equipe that Contador is the best Grand Tour rider, "which leaves no doubt about his leadership during the next Tour de France. The goal is to win. There is talk of a duel between [Lance] Armstrong and Contador, but what there is is a duel between ourselves and others," said Bruyneel, who also confirmed, "Armstrong is not the team's second rider. With what we saw in the Giro, that [role] is for Levi [Leipheimer]."

The Astana director added that Contador's main rivals for the Tour de France - including teammates Leipheimer, Armstrong and Andreas Klöden, plus Denis Menchov, Carlos Sastre, Andy Schleck and Cadel Evans - were "a step below" the level of the Spaniard.

Bruyneel also spoke of the possibility that Contador had been approached by Caisse d'Epargne about a move to the Spanish squad next season. "I spoke with Alberto during the Giro and [he] told me there was nothing about the rumour that he met with the Caisse d'Epargne [team]. Trust us," said Bruyneel.

He did add that the current situation surrounding sponsorhip of the the Astana squad, which is tenuous, meant that, "anything is possible". Although he said that Armstrong's presence on the team was a guarantee of sorts when it came to attracting sponsors because the American attracts so many fans.
Posted by Recovox at 8:59 PM