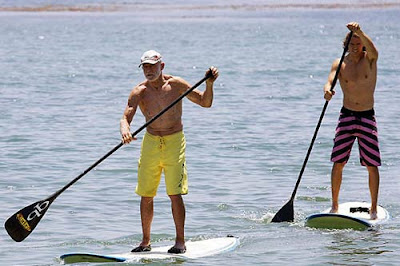 Don Wildman, founder of Bally's, speeds up at age 76. His fitness strategy? Younger friends. “Old guys don’t train anymore, so all my buddies are real young,” he says. “They’re more fun. They push you, and you push them, and you forget how old you are.”

As the writer discovered during one grueling workout session, the best you can do is just try to keep up with the 'Circuit' master, surfer and triathlete.

We're 45 minutes up a forbidding Malibu dirt road that climbs 2,200 feet in four miles, and the Wild Man is ahead. Way ahead. Out-of-sight ahead. And my excuses begin:

"I'm a mountain biker, but I've never ridden right after a grueling, two-hour, all-body weight-room workout before." "It's so hot -- 90 degrees and rising -- that I'm literally blinded in my own sweat." "I'm bonking because I haven't eaten a thing in over three hours."

But, of course, the Wild Man hasn't eaten either. He lifted the same weights I did, probably more. And, amazingly, he hasn't swallowed one sip of water all morning; he didn't even pack a water bottle on his bike. So at the top, when he greets me with his typical upbeat attitude -- "Wow, I'm really getting strong; that's the first time I ever rode this in my middle chain ring" -- I look at the leathery brown face, the slightly stooped shoulders, the washboard abs and bulging biceps, and I face reality: "A 76-year-old man just kicked my butt."

And then: "I better train harder."

Malibu resident Don Wildman, possibly one of the fittest septuagenarians on the planet, has always had that galvanizing effect on people. Founder of the company that became Bally's Total Fitness, the giant health-club chain, Wildman not only made a career out of telling people to get fit, he fit the part himself, packing his life with daily workouts and an endless parade of grand physical challenges -- world-class sailing races against Ted Turner, 90 holes of golf in a day, nine Hawaii Ironman triathlons.

The activities didn't retire when he did 15 years ago. He picked up big-wave surfing, helicopter snowboarding and stand-up paddle boarding, once paddling the length of the Hawaiian Islands. Every Monday, Wednesday and Friday, he leads "the Circuit," a grueling two-hour weight workout at his gargantuan home gym that has become legendary in Malibu. He rides seven days a week and paddles three. "I don't rest," he says.

And as you read this, he probably isn't sleeping. He'll be racing round the clock across the country on a road bike as part of Team Surfing USA, a four-man team competing in the 3,000-mile, coast-to-coast, Race Across America.

The team portion of the race, known as RAAM and now in its 28th year, began Saturday in Oceanside and will finish in Annapolis, Md., in about a week. Team Surf, which paddled 115 miles from Malibu to the start and will bike and paddle to the Statue of Liberty after the finish, hopes to use the event to raise money and awareness for several causes, including ALS (Augies Quest), autism (Beautiful Son Foundation) and cystic fibrosis (the Cystic Fibrosis Foundation).

A RAAM veteran, Wildman did the race at age 60 on a 1994 team that finished a few back from the winners in five days, 21 hours, and 24 minutes. Today, the father of three grown sons is old enough to be the dad of two of his RAAM teammates -- Tim Commerford, 41, the bassist for the rock group Rage Against the Machine, and 45-year-old Laird Hamilton, the famed big-wave surfer. He could be a grandfather of the third, Jason Winn, 27, owner of Bonk Breaker energy bars.

A day in the life

Entering my 50s and hoping to stay fit, I had wondered if I could hang with Wildman. I'd heard raves about him from tennis great John McEnroe, one of his Malibu riding buddies, during an interview. Hence, the workout and subsequent ride up the hill.

Now, with that pertinent question clearly answered, we coasted back down to his 5-acre cliffside estate and stashed our cycling gear in one of his four garages crammed with bikes and Porsches. Then we hopped in a souped-up golf cart and headed for his one-room beach house on the shore of Malibu's Paradise Cove. Next on the agenda: an hour of stand-up paddle boarding.

Before we wrapped up the nearly five-hour workout -- a normal thing for Wildman -- he jumped up to a bar and reeled off 12 full-hang pull-ups, his lats flaring out like a cobra's hood. I eked out 11; between gasps, I said, "I'll get you on these next time, Don."

"Yeah, but you better do those overhanded," he says. "You know those underhand ones are a lot easier." Of course, he's right. I need to train harder.

Some people keep very fit into their 40s and 50s. Wildman is heading full-speed into his 80s.

Wildman isn't exaggerating when he says that his mountain biking is stronger than ever. "My bike speed is similar to my Ironman days -- and there's a reason for that," he said. "Strength helps cardio. In the last decade, I started to try to keep my strength up. As you get older, the fall-off in strength is greater than the decline in VO2 max [oxygen uptake] -- unless you fight it."

Wildman took his old circuit-training routines and ramped them up into what he calls the Circuit, a now-legendary two-hour blasting session. One wing of his estate looks like a compact version of a Bally's gym, stocked with a couple of dozen machines, free weights and inflatable exercise balls.

Wildman usually doesn't work out alone. Joining us were his Team Surf teammates Commerford and Winn. Hamilton is also a frequent workout partner, along with McEnroe, 50, and Detroit Red Wings star Chris Chelios, 47. A pattern emerges: None of them is within a quarter-century of him.

Wildman eats healthfully and takes lots of supplements, but the key element to his fitness strategy is younger friends.

"Old guys don't train anymore, so all my buddies are real young," he says. "They're more fun. They push you, and you push them, and you forget how old you are."

Young friends also teach him new games. "When Laird met me in 1996, he saw that I was an aggressive snowboarder -- and thought I'd make a good tow surfer," says Wildman, who often joins Hamilton for surfing and paddle boarding in Hawaii and other big-wave hot spots.

Conversely, he got Hamilton hooked on mountain biking, an obsession since he moved to Malibu in 1983.

Of course, acting like a man 50 years younger carries some risks. Three years ago, Wildman tore his rotator cuff while snowboarding in Argentina. Heli-boarding six months later, he drove his left femur through the end of his tibia, shattering the latter. ("I couldn't walk on it for 12 weeks, but I could cycle with the other leg," he says.) Last winter, he broke his left femur at a right angle when his mountain bike slipped on black ice in Utah. Ten days later, he was doing chin-ups; two months later, snowboarding.

Surfing in Hawaii with Hamilton in September 2008, a barrel slammed Wildman into his board, punctured his lung and broke a rib. A month later, he won three gold and four silver medals in cycling events at the World Senior Games, which he has competed in for the last five years.

"Seeing high-level people your age once in a while is important," he says. "It tells you that you're normal."

If all goes as planned, there will be many more accidents and Senior Games to come, because "the Wildman luck" is genetic too. His dad lived to 88, his mom to 94. He's had no medical problems other than an overactive thyroid 30 years ago. He rarely gets sick.

Wildman likes being a role model but finds it ironic that usually he inspires younger people, not his peers.

"When I met the Wild Man, I was in my late 30s and already starting to think slowing down was natural," Commerford says as Wildman serves us raspberry yogurt at his downtown Malibu yogurt shop, his latest passion. "Then we rode together, and the same thing that happened to you happened to me: I thought, 'What's my excuse? I gotta train more!' "

Adds Wildman: "People my own age say, 'It's too late for me . . . but all kinds of studies show that even nursing home populations can improve with exercise. And you get the reward for it: The endorphins. So pick something that you really like doing -- cycling, trampolining -- and just do it.

Very inspiring.
I will pass on this article to some of my (young and old) friends