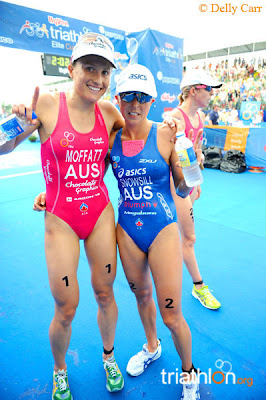 Current points leader Emma Moffatt of Australia continued her dream season with a win today at triathlon’s largest payday in a time of 1 hour 59 minutes and 46 seconds. With over $1million USD in prize money up for grabs this weekend it was the Beijing Olympic bronze medallist who powered her way through the Olympic calibre field to claim the $200,000 first place prize in the Hy-Vee ITU Triathlon Elite Cup this morning. In second was the other Aussie Emma, Emma Snowsill, 1 minute 33 seconds behind. And in third, Canada’s Lauren Groves another 12 seconds back.

"Wow, it's amazing, it hasn't sunk in at all yet,” commented Moffatt at the finish. “It's great to put together two great races in six days and to come away with the win, I'm ecstatic. It was good to make the break and get a lead and I was a bit concerned when Andrea [Hewitt] came with me for the first lap. I was just trying to focus on running and not on the money. I don't know what I'm going to do with it, I haven't given it any thought."

Sweltering, windy conditions greeted the 50 starters as they dived into Blue Heron Lake this morning. In typical fashion American swim expert Sara McLarty led out of the water, 37 seconds ahead of the group. Her lead would not last long though with an efficient pack led by last week’s Washington D.C. Dextro Energy Triathlon – ITU World Championship winner Moffatt, New Zealand’s Andrew Hewitt, 2008 world champion Helen Jenkins of Great Britain and the American duo of Sarah Haskins and Laura Bennett having closed the gap in the first three laps of eight.

The surprise was Olympic champion Emma Snowsill who failed to make the first group out of the water and was relegated to the larger chase group for the entire 40 kilometre bike segment. The bike course in West Des Moines is flat and technical with multiple hairpin turns, which favoured the eight woman lead group enabling them to put small amounts of time in the chasers on every lap. Entering second transition, the lead would be 55 seconds.

In a repeat of last weekend’s performance, Moffatt immediately went on the attack early in the run, dropping everyone except for Hewitt. The Kiwi would not last long however, and by the end of the first lap Hewitt was already beginning to fall back leaving Moffatt to cruise to victory and her largest payday ever. Never taking her foot of the gas for a moment Moffatt still posted the fastest run of the day with a 35:35 10-kilometre split.

Second place Snowsill showed her run prowess reeling in the entire lead group, except for Moffatt, with the second fastest run split of the day. After an up and down 2008, Lauren Groves showed her run form keeping within striking distance of Snowsill all day to claim her first major podium.

“Two podiums in two weekends is really pleasing, especially from where I've been placed after the bike”, said Snowsill. “It's easier to have your team mate beat you. I think we'll be having a big party back in Oz when we get home!"