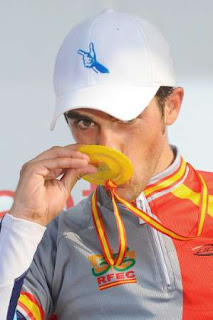 Alberto Contador is the new national Time Trial Champion of Spain. Contador (26) was the fastest rider on the 47.8 kilometer long course between Torrelavega and Cuevas de Altamira. Contador was challenged by Luis León Sánchez (Caisse d’Epargne) who had the best intermediate time – one second faster than Contador - after 27kms. But in the second part of the race, Contador reversed the situation finishing 36 seconds faster than Sánchez. Ruben Plaza (Liberty Seguros) finished third, one minute and 4 seconds behind.

For the Spanish champion, it’s his first gold medal in the event as a professional rider (as U23 rider he won the 2002 championship). Earlier this season, Alberto Contador won three other time trials (in the Tour of Algarve, Paris-Nice and Tour of the Basque Country).

“I needed some extra training on my new Trek time trial bike”, commented Contador. “And the best way to do that is in a race. Thanks to its distance this was a good simulation of the Tour de France time trial. My preparation for the Tour is done. I cannot complain. I am ready. This was of course not only training, I really wanted this Spanish title. I had to struggle till the end to beat Luis León. I am proud to be the champion of Spain, and I will show the Spanish colors for the first time in Monaco in the first stage of the Tour de France.”