Lance Armstrong Competes in a Triathlon
KAPALUA, Hawaii -- Lance Armstrong crashed and hit his head with about a mile to go in the mountain-bike ride and faded from second to 23rd in the running leg of the XTERRA World Championship, with Austria's Michael Weiss finishing strong to win the off-road triathlon Sunday.

The seven-time Tour de France winner, fifth in the XTERRA USA Championship in Utah last month in his first triathlon in 22 years, faded badly in the run on a day where the temperature reached 90 degrees.

"Everybody paid the price on the run, even Weiss, who can run," Armstrong said. "It's just a damn hard course, a death march."

Weiss passed Armstrong about 14 miles into the bike leg.

"I can just say it is an honor for me to race Lance," said Weiss, a 2004 Olympian in mountain biking for Austria. "I outrode him on the bike, from my point of view."

South Africa's Conrad "The Caveman" Stoltz, the South African who won his fourth title in the event last year, dropped out on the third mile of the run.

Lesley Paterson of San Diego won the women's race.
Posted by Recovox at 6:36 PM No comments:

Posted by Recovox at 6:59 PM No comments:


The 25th Annual Nautica Malibu Triathlon was held on September 17&18th at Zuma Beach. This year's events included a Classic Distance and International Distance triathlon, as well as the Nautica Kid's Run and Tot Trot. Congratulations to all athletes that joined us on the shores of Malibu, CA. Together we raised over $1.1 million for Children's Hospital Los Angeles and its pediatric cancer research program.
Posted by Recovox at 12:24 PM No comments:

Dave Zabriskie - Do I Even Tri? 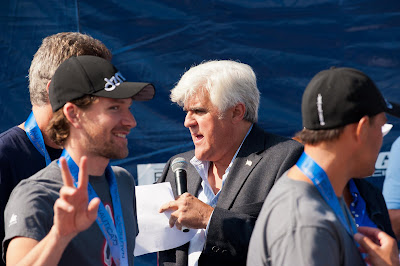 I’ve often been asked if I’ve ever done a Triathlon and always reply with some explanation that includes how much I’m looking forward to it, one day. Well my first opportunity presented itself a few weeks ago as I was invited to join the Goo Goo Dolls relay team at the Nautica Malibu Triathlon (www.nauticamalibutri.com). Having never competed before I wasn’t entirely sure what to expect, and certainly didn’t know that these triathlon’s are early morning events. Really early. I was up at 4:00am and Googled the earliest opening Starbucks in my area because I was too out of it to even make coffee. I’m not sure I really want to be the first customer of the day at Starbucks and I didn’t feel like they were entirely happy to see me around 4:30am. I arrived at the race course and was thrilled to see that the TV Show The Office would have a team competing in the celebrity relay division as well. I thought it was rather cool that I would be racing against Dwight Schrute (Rainn Wilson). I asked my teammates how seriously we were taking this and was told the goal was to win. Well OK…stupid question. We gave it our best shot. I put myself at near maximum effort on the bike and we beat the team from The Office as well as the very fast guys from the TV show Franklin & Bash. But glory was not be ours as we took 2nd on the day after the swim, bike and run, losing to the Glades team. I enjoyed the heck out of myself, thanks for having me guys, and look forward to competing once again. 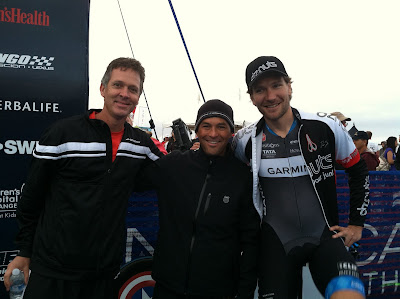 For more on Dave Zabriskie make sure to check out his site at (www.davezabriskie.com) or click on the title link.
Posted by Recovox at 3:55 PM No comments: 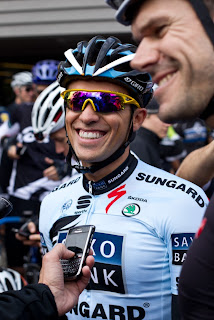 Three-time Tour de France winner Alberto Contador met fans and the media Tuesday in Sausalito and Tiburon and called for more involvement in anti-doping regulation for riders. Contador (Saxo Bank-Sungard) said he was confident that the Court of Arbitration for Sport would rule in his favor over a 2010 clenbuterol charge next month and that the World Anti-Doping Agency would soon implement new standards for the drug in its code. 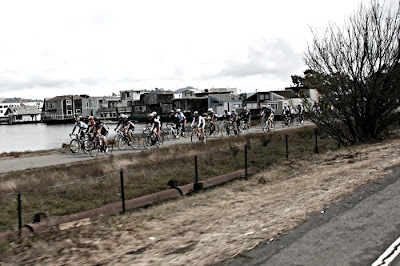 In a 40-minute question and answer session with a small group of journalists in the small Bay Area town, Contador was relaxed, flanked by his brother Fran and Specialized Racing road team manager Simone Toccafondi. After back-to-back group rides out of nearby Sausalito — the second seeing more than 100 riders meet at Mike’s Bikes and follow the Spaniard for a hard, sometimes harrowing loop in Marin County — the three-time Tour de France champion answered a run of questions about his 2012 race plans, the new Specialized Tarmac SL4 and his ongoing clenbuterol case. 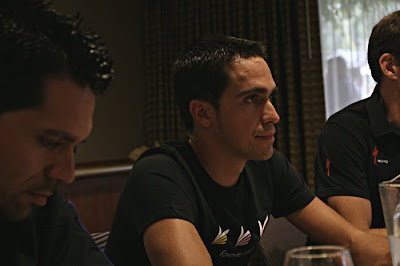 To read the whole interview please click on the title link.
Posted by Recovox at 2:44 PM No comments: 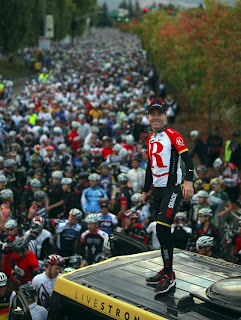 Like a Pied Piper on two wheels in a red, black and white Team RadioShack jersey, pro racer and hometown hero Leipheimer exhorted the crowd to stay safe and enjoy.

“This is the best day of the year for all of us,” he said, a grin on his face.

The day was marred by several crashes, with helicopters taking one rider from Hillsborough and a couple from Canada to the hospital after they spilled on the steep and demanding King Ridge Road.

But for the vast assemblage of cyclists, the GranFondo has become a celebration not only of cycling, but of a community that turns out to embrace the sport, support the event’s charitable causes and celebrate one of the nation’s most beautiful cycling destinations.

Along with the Amgen Tour of California, which starts next year in Santa Rosa, Levi’s ride tells the cycling world it is welcome here, organizers said.

“It’s so much more than a bike ride,” said master of ceremonies David Towle, a nationally known cycling announcer in his second year at the GranFondo microphone.

The start was smooth, if prolonged, once Towle launched the third annual ride with a booming “Andiamo!”

It took a little more than 30 minutes for the last bicycle to reach the starting gate behind a sea of riders spread across both northbound lanes of Stony Point Road. Many had taken up positions more than a hour earlier to make sure they set off with the faster riders. 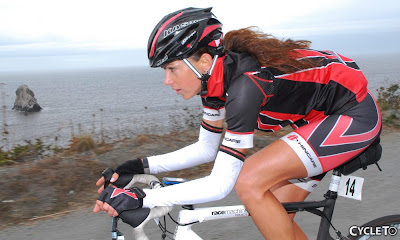 “Last year, I did it on a whim,” Washington, D.C., resident Chris Kawolics said. He figured it would be fun, but that the cost and hassle of shipping his bike would mean it was a one-time trip.

“This year, as soon as the website opened up, I was on it,” he said.

Fashioned after an Italian cycling tradition, the GranFondo — Italian for “great ride” — is a noncompetitive, group ride that combines fun, camaraderie, scenery and some killer hills.

The three courses ranged in difficulty from the grueling, 103-mile “gran” ride with quad-busting grades like King Ridge Road and 8,500 feet of vertical climb, to the 65-mile “medio” ride from the coast and back over Coleman Valley Road, to the “piccolo,” a more leisurely 35-mile tour of pastoral Sonoma County.

Event Director Carlos Perez, publisher and editor of Bike Monkey Magazine, said it was stunning to look out on the sea of humanity gathered “because Levi Leipheimer just had a morsel of an idea in his head.” 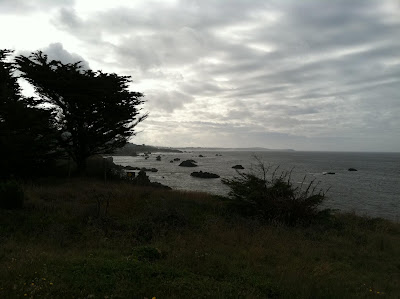 Cycling resonates with the outdoorsy, Wine Country, green lifestyle of Sonoma County, she said. The fondo’s fundraising purpose also appeals to a populace known for volunteerism and supporting nonprofits. “I don’t know another event that hits on all the metrics like that,” Towle said.

Last year, the fondo contributed $175,000 to local cycling initiatives and stake money for Santa Rosa’s role in the Amgen race. Other charities include community public service agencies and school programs, Forget Me Not Farm, where abused kids find comfort in working with animals, and Livestrong, founded by famed cyclist and cancer survivor Lance Armstrong.

“It’s so beautiful to see that the cycling community is so supportive here,” he said. “And the countryside is gorgeous.” 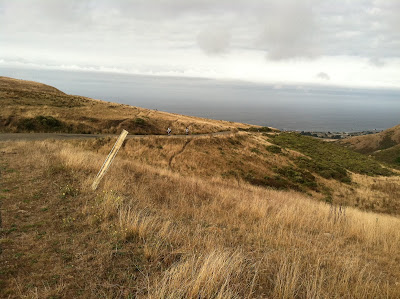 Posted by Recovox at 2:33 PM No comments: