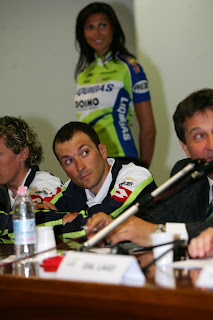 In a last minute decision, Ivan Basso of Liquigas-Doimo will also ride the Critérium Dauphiné Libéré. Basso finished fifth in the Giro d’Italia and despite several big efforts, did not succeed in winning a stage. The long climbs of the Alps, which tend to have somewhat easier gradients than the Italian climbs, have tended to suit Basso well. No doubt he’ll take any opportunity for a win that may come his way. Basso will also benefit from the opportunity to ride a long crono in competition. After two years away from the sport, Basso can use all the racing he can get, especially in a discipline that has long been his weakness. Young rider Vincenzo Nibali will also race the Dauphiné for Liquigas-Doimo in an effort to hone his form for the Tour de France. Nibali will share captain’s duties at the Tour with Roman Kreuziger, who last year won the Tour de Suisse.
Posted by Recovox at 11:50 AM