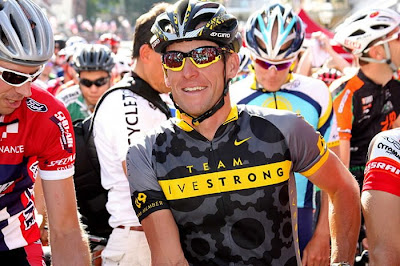 As expected, Lance Armstrong and Alberto Contador are included in Astana's 2009 Tour de France team, which was officially announced today.

Contador was unveiled as team leader by Astana directeur sportif Johan Bruyneel, but it's hard to see the team not getting behind seven-times Tour winner Armstrong if he turns in a better ride.

"After winning the Tour in 2007 and then becoming the fifth cyclist in history to win all three grand tours," said Bruyneel via the Astana team website. "It's hard to find a better stage racer than Alberto. "He has worked very hard, earning the right to represent the team as leader this July."

Bruyneel was equally ready to praise Armstrong: "I'm very happy with where Lance's form is leading up to the Tour. He's worked very hard during his comeback season and I know he is extremely motivated for the Tour de France." Armstrong and Contador have a very strong squad to back them up - whichever rider they ultimately rally behind - in their aim for overall victory.

Andreas Kloden, Levi Leipheimer, Yaroslav Popvych and Haimar Zubeldia are all seasoned stage racers and are capable of stage wins in their own right as well as performing super-domestique duties for Armstrong and/or Contador.
It's certainly one of the most diverse teams in the Tour, with seven countries represented in Astana's Tour line-up: USA, Spain, Germany, Kazakhstan, Portugal, Ukraine and Switzerland.

Having suffered from money troubles in the lead-up to the Tour, the Kazakh squad's accounts now seem to be settled and the Union Cycliste Internationale have given them the green light to carry on racing. For now.