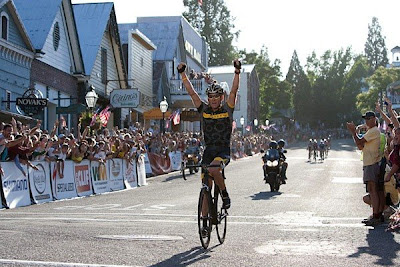 The three amigos – Lance Armstrong, Levi Leipheimer and Chris Horner – showed up for another USA domestic race and once again they gave the fans quite a show. Armstrong, a seven-time Tour de France winner, won the California's Nevada City Classic solo Sunday thanks to his two Astana teammates.

"We will be ready for the Tour and we'll be strong."

"Better and better after the Giro," said of his form after racing the Giro d'Italia last month. "I recovered well. We will be ready for the Tour and we'll be strong."

Armstrong's win in the tiny Northern California town will boost his morale ahead of the Tour de France, July 4 to 26. Team Bissell's Ben Jacques-Maynes, who mainly races in North America, finished second behind Armstrong and ahead of Leipheimer.

"They are that strong and will be racing the Tour de France. I know not to try to go toe-to-toe with Levi. I have tried that before and I know what happens," said Jacques-Maynes.

Riders consider the Nevada City Classic one of the toughest criteriums in the USA. The 1.3-mile course climbs over 100 feet per lap, going uphill for the first two-thirds and then downhill past the start/finish line.

There were 104 riders at the start of the 35-lap event. It quickly became the Lance and Levi show when Levi and Lance took turns attacking. Only Jacques-Maynes could to respond to the attacks, but he had a difficult time trying to follow the wheels of his two breakaway companions.

"I couldn't pull, if I took one pull I would have been dropped," he said.

"Initially, Zwizanski and I were drilling it trying to hold Levi and Lance, but it wasn't happening. Once they [the three leaders - ed.] got out to a minute or so, Horner started working," noted England.

"One of them was going to win and Lance was probably the better choice. I let him go," said Jacques-Maynes.

The crowd, around 25,000, cheered loud when Armstrong passed solo across the line.

"We didn't have one," said Armstrong of the team's strategy. The race "is so selective that it gets down to a few guys. We traded off doing two laps easy, two laps hard but we couldn't shake Ben. After we couldn't shake Ben we just said we will just go easy until the end and then we will figure it out."

"Lance said that we needed to go on the second or third lap," said Leipheimer. "I said 'you're crazy we can't do that', but that's what worked out."

Armstrong looked the part of the winner, with hardly any fat showing on his body. He said he will start the Tour de France two kilograms less than the Giro d'Italia.