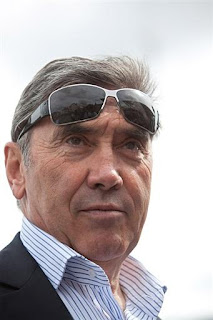 The Tour de France now being no more than three weeks away, the greatest Belgian cyclist and five-time Tour de France winner Eddy Merckx has given his opinion on the overall contenders for the race. Speaking to French newspaper La Voix des Sports, the man nick-named "Cannibal" during his time had trouble pinpointing any particular rider as his personal favourite, but still designated Alberto Contador as the most likely to win.

"It's difficult to come up with one single favourite," said Merckx. "We've had a very beautiful first part of the season. The Giro d'Italia was particularly indecisive. Menchov was very strong, but I think that Contador still remains the big favourite. He's the best rider on a three-week race.

"We expected a lot of Leipheimer on the Giro, but he was a bit deceiving during the final part of the race. It's a very special race..." continued Merckx, adding his opinion on Lance Armstrong's performances at the Giro.

"Armstrong? We saw that it was difficult for him. He came to the Giro wanting to make the most of it. I think he did well. He even gave the impression that he progressed as the race unfolded on the climbs. We'll see how he will recover now. But he is very motivated for the Tour."
Posted by Recovox at 9:08 AM