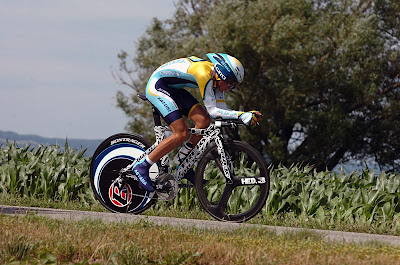 The individual time trial is often called the race of truth and certainly in many instances it is. It always shows when a rider has good form, but when it comes mid-race before four days of high mountains it might not accurately predict who will stand on the top step of the final podium. In today’s long 42.4km/26mi time trial on a mostly straight course with few turns, world time trial champion Bert Grabsch (Team Columbia) blazed the course with the best time of 51:26. Close on his heals was Cadel Evans (Silence-Lotto) just seven-seconds back and David Millar took 3rd at 39-seconds off the pace. Team Astana’s Alberto Contador pulled in at 52:18, forty-four seconds behind Grabsch.

“The result of the time trial is very good for me,” said Contador after the stage. “I am content having completed a good time in a test like this. Clearly I still have to keep spending hours training on this bike, but my preparation for the Tour is perfect,” he concluded.

Evans’ strong performance put him back into the lead of the general classification, one day after losing it to a successful breakaway orchestrated by Niki Terpstra (Milram). Terpstra started last and hoped to ride well enough to protect his sixty-one second lead over Evans, but finished the course on his road bike rather than his time trial machine, evidence that he suffered a mechanical and needed a bike switch. With perhaps no spare TT bike available, Terpstra was forced to do his best on the road bike but he came nowhere near the top times, stopping the clock at 56:53, well off the pace and slipping out of the top ten on GC. Another unremarkable performance went to Alejandro Valverde (Caisse d’Epargne) who took 10th on the stage and dropped to 8th on GC. Perhaps receiving the news today that he would be unwelcome to ride the Tour de France next month did nothing to motivate the Spaniard on the roads of France.