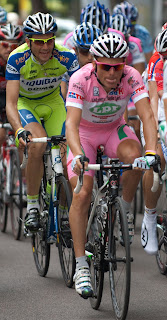 DI LUCA IN TROUBLE FOR ONE-FINGER SALUTE
Danilo Di Luca was forced to publicly apologise for flipping the bird to the tifosi during Sunday's go slow protest in Milan.

The Giro d'Italia leader (pictured) was caught on television responding to the public with his middle finger after they had booed him when he announced that the riders would not race the stage.

“Did people see it? It was because people insulted us. I'm sorry, it's because we were all nervous about the stage,” he said.

“Unfortunately the protest became a joke when some of the teams didn't respect the idea of letting the Rabobank team cross the line first. We went from being right to being wrong.”

ZOMEGNAN AND LANCE FALL OUT OVER PROTEST
Lance Armstrong's special relationship with Giro d'Italia race director Angelo Zomegnan seems to be on the rocks after the protests in Milan.

Armstrong appeared to be one of the ringleaders, standing on the front line with Danilo Di Luca when the riders stopped mid-way through the stage.

Zomegnan has never been kind with any rider who crosses him and vented his feeling on Italian television.

“This circuit required explosive bursts. It required riders to get their butts up off the seats of their bikes, and some riders who are not so young anymore apparently don't feel like doing that. Instead, it seems like their legs have become shorter and their tongues longer,” Zomegnan said.

Asked by the Associated Press if he was referring to Armstrong, Zomegnan said: “I never name people who have disappointed me, just like I don't name girlfriends that have snubbed me.”

Armstrong was also reportedly livid with the tone of the story in Monday's Gazzetta dello Sport newspaper.

It seems his infamous black list has a few extra names on it after only the first week of the Giro.

NEW BIKES FOR LANCE AND LEVI
Lance Armstrong, Levi Leipheimer and their Astana team mates trained for two hours on the first rest day of the Giro and then checked out the new black and yellow Trek bikes being build ready for Thursday's key time trial.

Trek have produced a special road bike fitted with aero bar extensions that will give Armstrong and Leipheimer a good compromise between aerodynamics, handling and weight.

Australia's Allan Davis of the Quick Step team got a five out of ten for taking Petacchi off Mark Cavendish's wheel in the final kilometre of the sprint in Milan.

Petacchi also got a five for not fighting back and for his lack of sprinting skills when the gloves come off.

UCI GIVE 52 RIDERS AN EARLY WAKE UP CALL
52 riders from the Astana, Barloworld, Liquigas, Diquigiovannni and Garmin got an early wake up call from the UCI on Monday.

The riders were all asked to give blood samples for the UCI's anti-doping biological passport scheme between 8:30 and 9:30am, ruining any chance of them having a lie-in on the first rest day.

Lance Armstrong pointed out on his Twitter feed that the test was his 28th since he announced his come back last summer.
Posted by Recovox at 10:24 PM