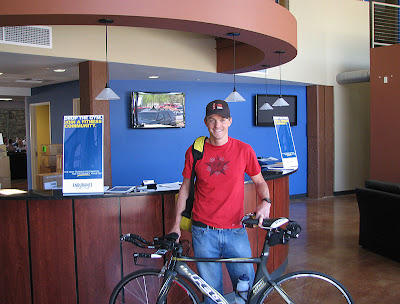 I’ve been a traveling fool since Australia. I was home less than a week and headed right back out to North Carolina for some time in the wind tunnel with the crew from CTS. I’ve been to the tunnel in Texas and San Diego, but this was my first time in the “Nascar” tunnel. I’m much more of an F1 and Moto GP fan, but car racing is all good, and to see where they do some testing is always fun. The “car” tunnel is huge compared to the bike one, and it runs pretty much 24/7. You think the pro tour teams get precise in there, it’s crazy how much the Nascar race teams test just to gain a slight edge.

As for my time in the tunnel, I learned a lot again. I had about 5 hours to myself and a great crew to help me out. I wasn’t there to make any drastic changes to my actual position on the bike. I was more interested in some helmet options, water bottle placement, uniform options, etc… I did realize some good things about my position though. let’s just say some things were a little off fit wise in OZ, and I’m feeling way better on the bike now.

After the tunnel, I got home and started to get back into some real training. The run had beaten me up a bit in OZ, so I was slow to get going back up to full speed. Pretty typical of post Ironman is: I gain fitness in the swim and bike, and the run needs a good chunk of time to get back rolling again.

I’ve spent quite a bit of time out at the Pearl Izumi offices lately. I was able to give them some good feedback on both my cycling and running shoes post race, and my uniform as well. It’s so great to be working with such an incredible company. They are so dedicated to producing top of the line stuff. I can only say that the 2010 tri stuff I am testing now will blow everything else on the market away. My uniform in OZ was some pretty high tech stuff and I could not have been happier. You should see quite a bit of trickle down to the production stuff, just like you see in the cycling line from the Garmin team.

Lastly, I just got back from cheering on the wife in her foray back into competitive swimming. Nicole competed in Masters Nationals in Clovis, CA this past weekend. Pretty cool to see the competitiveness come back out in her athletically. I was impressed with how fast she swam considering in the month before she had trips to Australia and Taiwan! It was also cool to see Rowdy Gaines go 43 in the 100yd free at 50 years old! He only knocked 5 seconds off the old record.
Blue Seventy should be really psyched with all the suits I saw out there, except for the one guy who split the ass in his suit on the starting blocks…twice! Definitely got the crowd laughing.

I’m now home. Did some testing at the new CTS training facility today to make sure all is on track, and to let me know I’ll be ready to mix up some short course racing soon. Their new place is sweet. If you ever get to the Springs, check it out.

For more on Tim check out his blog by clicking on the title link.
Posted by Recovox at 10:38 AM